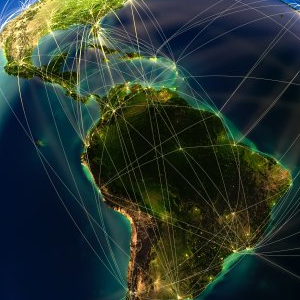 This past July, the world’s biggest iron ore producer, Vale, announced that the firm is turning to palm-tree oil and wind turbines to insulate earnings from the rising costs of energy. The Brazilian multinational plans to produce 420,000 tons of fuel from palm oil annually by 2019 and build two wind farms by 2014, according to Bloomberg.

Alternative energy investments worldwide are up nearly 32% from last year, and developing economies account for more than half—over $72 billion versus $70, a stark contrast with 2004 when emerging markets made up less than 25% of energy investments.

As for Latin America, investments have increased 39% since 2004, topping $14 billion. Indeed, Latin America is emerging as a major world producer of biofuels, capitalizing on fertile land and favorable weather, as the soil and climate create ideals conditions for developing ethanol from soy and sugar cane (more efficient than heavily-subsidized corn-based ethanol dominant in the United States). Some analysts believe that Latin America’s production of biofuels could one day rival that of China, India and Indonesia—nations that are already among the world’s top 10 producers, according to the OECD.

However, promising alternative energy sources may be, they face serious pitfalls for substitution of fossil fuels. David Fridley, a staff scientist at the renowned Lawrence Berkeley Laboratory, cites a number including scalability and timing, commercialization, substitutability, material input requirements, water requirements and return on investment.

With regard to Latin America, renewable fuels are destined to play a minor role. While it is true that cheap land, low cost labor, bumper crops of soybeans and government tax incentives make a country like Argentina a prime target for ethanol and biodiesel production, the downside is great.

First, is the impact on people—especially the poor. Neither ethanol nor biodiesel can replace petroleum without having a major impact on food supply. Diversion of food production to biomass raises prices and hurts small farms severely—especially indigenous populations.

Second, there is the issue of environmental damage—top soil erosion and pollution caused from pesticides and fertilizers along with massive deforestation including the Chaco and Amazon and other areas that are large sources of biodiversity.

Third, there is plentiful and expanding oil and gas sources already: Brazil, Ecuador, Colombia, Argentina, Trinidad and Tobago, and the prospect of Mexico opening up its energy sector to private investment

Fourth, technological advances in fossil fuel conversation—oil, gas, coal—means that energy production is continuously becoming cheaper, better and—yes—cleaner. Most notable advances have been in the mileage efficiency of motor vehicles.

But isn’t Brazil testimony to the region’s possibility to be an alternative energy powerhouse? Admittedly, Brazil is and will continue to be an ethanol giant, with its supply predicted to triple to 73 billion liters by 2020 and flex fuel vehicles to represent 75% of the vehicle fleet. But Brazil has been in the ethanol game for decades, has huge sugar crop lands, and possesses state-of-the-art technology for biofuel conversion. In essence, there is only one Brazil.

Growth in shale oil and gas supplies, along with other fuel sources, will make the Western Hemisphere virtually self-sufficient in energy by 2030, according to a BP energy outlook report.

While alternative energy holds great promise for Latin America, serious limitations and costs (fiscal, social, environmental, health and financial) limit its potential at present. The reality is that the promise of energy independence for the region will be fulfilled through traditional sources.

Jerry Haar is a professor, associate dean at FIU’s College of Business, and director of FIU’s Pino Global Entrepreneurship Center. The opinions expressed in this column are the writer’s and do not necessarily reflect the views or opinions of either FIU or the College of Business.

This column originally appeared in Latin Business Chronicle on October 11, 2012.