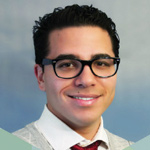 As a business student, Frankie Coletto (BBA ’07) often stared at the banners celebrating successful Florida International University (FIU) entrepreneurs, and made a promise to himself: someday, he would be up there.

Four years later, his dream became a reality. The CEO of PassTheNotes.com was one of five FIU graduates featured in the Pino Global Entrepreneurship Center’s 2012 Entrepreneurship Awareness Campaign, which made its debut in November.

Coletto’s recognition provided a much-needed boost of support for his entrepreneurial efforts.

“Entrepreneurship can be intimidating,” said Coletto, whose company has grown from the three original founders to a staff of seven in the past year. “This recognition is someone from the outside saying, ‘You guys have the right stuff.’”

Coletto credits much of his success to two opportunities offered by the Pino Center:  the Americas Venture Capital Conference (AVCC) and the Business Plan Challenge.

The 2011 AVCC gave his company the opportunity to pitch to investors looking to fund growing ventures. It also brought his early-stage venture to the attention of dozens of experienced investors and analysts, who offered a wealth of advice on next steps. A focus on growth has nearly doubled the number of client schools for the online note-sharing platform.

“The conference propelled us into the limelight, and it brought awareness of who we are,” he said. “People started following us back then, and they’re the same people who are in touch with us now.”

Milana V. Kuznetsova (BS ’08), co-founder of ESENEM, a cloud-based data service for the legal field, and another entrepreneur celebrated in the awareness campaign, is a Business Plan Challenge winner who presented her company at the 2012 AVCC, held December 13-14, 2012.