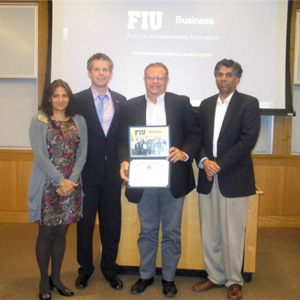 The award for the Digicel Entrepreneur of the Year 2012 took place in Port-Au-Prince, Haiti in December 2012. Jean Lionel Pressoir of Lojistik S.A.—who has built a tourism company to promote Haiti’s beauty and culture—was selected for the honor.

Prior to the competition, Pressoir was one of 24 Haitian entrepreneurs who attended a Digicel CEO Retreat, held at Florida International University (FIU), the third time FIU has hosted the event.

College of Business faculty member Dileep Rao, who was one of the program instructors and coaches, attended the award ceremonies, at which Michel Martelly, president of Haiti, and Denis O’Brien, founder-CEO of Digicel, presided.

Offered through the college’s Executive and Professional Education (EPE) office, the program helps “expand entrepreneurship, which reaches into all levels of Haitian society, helping economic growth and prosperity,” Rao said.