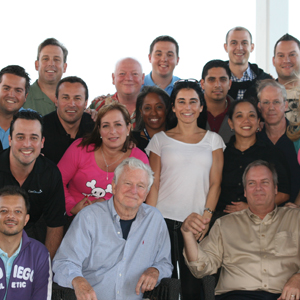 To re-launch its Executive MBA program, the College of Business at Florida International University (FIU) brought the 21 enrollees together for a full week’s immersion in teambuilding activities and a range of presentations covering innovation, leadership and public speaking skills. During sessions at FIU Downtown on Brickell—where the students will meet twice monthly for face-to-face classes—and for four days in the Florida Keys, classmates got to know each other, several faculty members and key program staff.

By the time of the Keys stay, classmates were already forming opinions about the program.

Kevin Hamann, senior vice president of merchandising, Systemax/TigerDirect.com, wants to “be a better leader,” and feels the program will help get him there.

“The caliber of the cohort is beyond what I expected and the facility on Brickell is state of the art,” he said. “We are learning important analytical skills, strategic thinking and the leadership skills to move our companies forward.”

“I have lots of leadership experience . . . in the form of giving orders,” said Brett Phillips, retired Air Force officer, Special Operations Command South, with a grin. “I’m challenging myself to do something new.”

To Phillips, the program was off to a strong start.

For Miguel Angel Rodriguez, general manager, CR Aviation Inc., the program offers a way to prepare to take over the family business, fulfilling wishes of his father, who began over 18 years ago as janitor and is now the CEO. However, the younger Rodriguez, an active pilot, holds degrees in public health and kinesiology.

“I want to be in a better position to make business decisions,” he said. “I had intuitive feelings about issues, but didn’t know the connections.”

“I love it,” she said. “I love the idea that you are not expected to memorize, but rather to think.”

And as a former operations officer in the Israeli air force, she explains that the program will give her the career equivalent of “moving up from the navigator’s seat to the captain’s seat in the cockpit.”