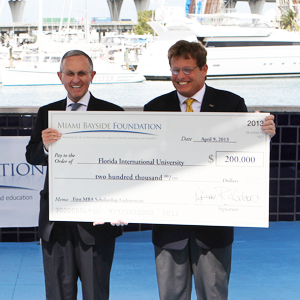 On a sunny day at Miami’s popular Bayside Marketplace, the Miami Bayside Foundation presented a $200,000 gift to Florida International University’s (FIU) College of Business to endow its first MBA scholarship, which will benefit Miami residents studying in MBA programs at FIU Downtown on Brickell.

“What we have here is a model partnership that truly enhances our institution,” David R. Klock, dean of the FIU College of Business, told the group assembled for the April 9th check presentation. “The Bayside Foundation understands all that our graduates will do to foster economic development in Miami.”

“Our board represents a diverse group of people who come together to make a difference by improving education in our urban core,” said Nathan Kurland, chair of the Miami Bayside Foundation. “This endowment speaks to the Bayside Foundation’s recognition of the economic importance of FIU to the City of Miami.”

Pamela Weller, general manager of Bayside Marketplace, noted that in 2012, a record amount had been disbursed by Bayside Marketplace to the Foundation, a nonprofit established in 1986. The Foundation also administers a loan program for City of Miami minority businesses, and provides technical assistance to community and development organizations in the City of Miami. The annual contribution was outlined by legendary developer James Rouse in his original plans for the open-air marketplace.