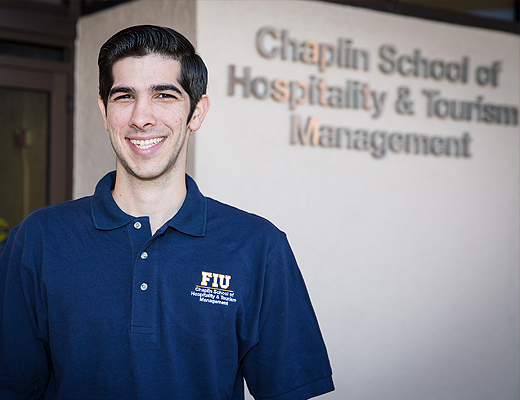 FIU marketing major Alex Bello is about to put his hamburger creation up against the best in the world.

The Buffalo Mac ‘N Cheesy Burger will make its grand entrance at the Amstel Light “Burger Bash” on February 20. During the event, burger virtuosos from near and far will compete for the “Best of the Bash” title. A panel of judges, including Red Robin executives and celebrity chef Marc Murphy, of Food Network’s “Chopped”, will select the winner. Now in its 14th year, SOBEWFF is hosted by Southern Wine & Spirits of Florida and FIU’s Chaplin School.”

Leading up to the February 19-22 event, Red Robin challenged FIU students to submit a recipe for their best rendition of a pub-inspired, Tavern Double burger.

In addition to burger bragging rights, Bello, a senior, won a $10,000 scholarship and the chance for his creation to be featured for a limited time on the menu at some Red Robin restaurants.

Bello learned about the Red Robin contest while he was working at the Chaplin School recruiting ambassadors and volunteers for SOBEWFF.

“I found it a cool mix between the business and culinary worlds,” added Bello, who will graduate from the College of Business in December 2015. He has no formal culinary training but likes to be inventive in the kitchen. “This shows that anyone can be creative and think outside the box. It’s kind of funny because you wouldn’t have expected me to apply; I guess it was meant to be.”

So how did Bello come up with the mac ‘n cheese on burger idea? He checked out Red Robin’s menu to identify easy-to-make dishes and put them together.

“I wanted to make something that would stand out to someone reading or hearing the menu,” he said. “It’s something creative and sounds good.”

The restaurant’s team helps promote and judge the contest. Once the FIU entries were received, three culinary faculty members selected the top 25 and submitted those to Red Robin. The Red Robin team then picked the top 10 burgers, each one was cooked and the winner was selected.

“Red Robin’s goal was to develop a gastro-pub burger,” said Qureshi. “Alex made it simple and they loved it.”

SOBEWFF began as a one-day event known as the Florida Extravaganza held at FIU’s Biscayne Bay Campus, showcasing wines from national and international wineries paired with food from local restaurants and chefs working with hospitality management students. In 2002, it was relocated to South Beach. Since its start, SOBEWFF has raised more than $20 million for the Chaplin School.

“We greatly appreciate the partnership with Red Robin and the opportunities presented to FIU students as a result of this collaboration,” said Mike Hampton, Dean of Chaplin School. “We take great pride in teaching our students to be innovative and challenge the status-quo.”