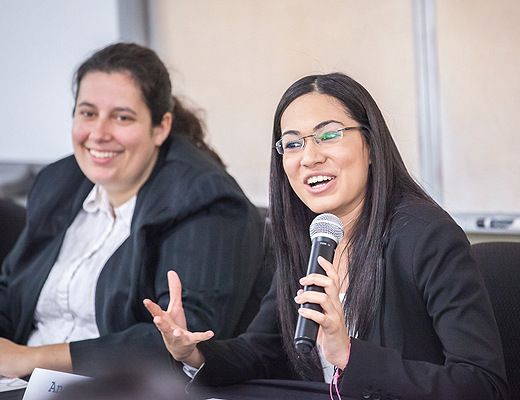 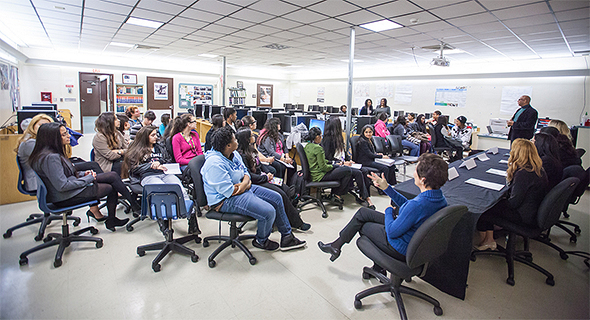 When Jennifer Baker was in high school in Texas, no one discussed a possible future in Management Information Systems (MIS). Now that she’s a junior at Florida International University (FIU) working on a bachelor’s degree in MIS, she’s determined to spread the word: MIS is a field high school girls should take seriously.

Baker is the current president of ITWomen NextGen, an organization in the College of Business that is working to increase the number of women in the fields of technology and engineering. ITWomen NextGen held a four-woman panel discussion entitled “MIS Careers: The Jobs of Tomorrow” for 40 female high school students enrolled at the Miami Lakes Educational Center (part of Miami-Dade Public Schools), on February 20, 2015. 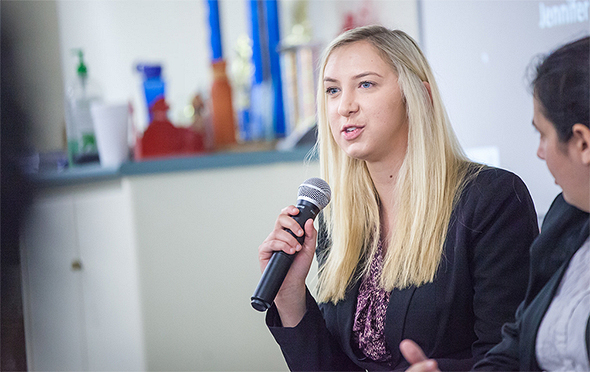 Baker, who is now working on a bachelor’s degree in Asian Studies as well as MIS, welcomed the opportunity to mentor younger women.

“Our organization has benefited from women in the field coming to speak with us at FIU about their professions, pulling us forward by sharing what they know. Now it was our turn to do the same for high school girls,” she said. “That’s what motivated me to be part of the panel discussion.”

FIU instructor Simpson said the audience was very receptive to what the FIU students were sharing.

“Messages coming from other students who are just slightly older beats any marketing campaign,” she pointed out. “The response from the attendees was very positive. They asked so many questions.”

Also on the panel were FIU MIS majors Alana Ascanio, Ana Marinez and Laura Smith, the founding president of ITWomen NextGen, the first college chapter of ITWomen, a not-for-profit organization based in South Florida. 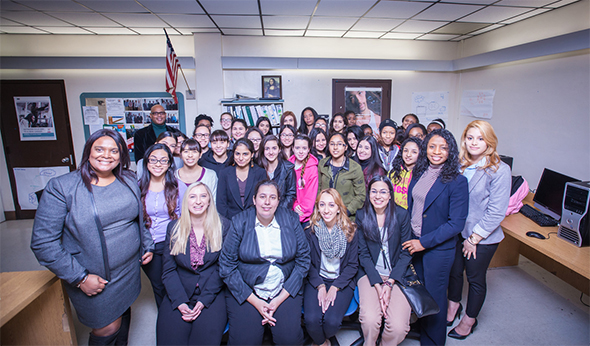 Women should know the advantages of MIS career.

A disproportionate number of people in MIS are men. According to a 2012 Forbes estimate, women are only 26 percent of the field. But it’s a field less troubled by gender parity than others; women’s earnings are 97 percent of men’s earnings.

“Our panel discussed the need for more women in MIS and why we are choosing careers in the field,” said Smith, a graduating senior with a double major in MIS and International Business who moderated the panel. “We also shared why we selected FIU, spoke about the high regard we have for our instructors and peers, and discussed the skills we’re gaining in our classes.”

Cousins reported that 30 out of the 40 attendees requested more information about an “MIS boot camp” for high school girls to be held at FIU this summer.