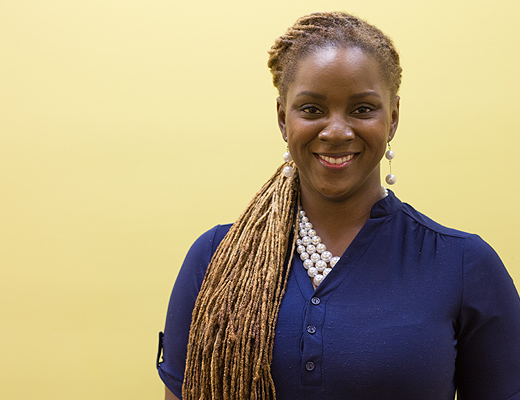 Hungry to showcase Caribbean culture on television, Calibe Thompson set out to make her ideas a reality. As CEO of Blondie Ras productions, she created and produced three shows, but that was a long way from making her venture a real business.

Turning to the SBDC at FIU, Thompson found the guidance and support to build the backbone of Blondie Ras. That set the wheels in motion to develop a roadmap for the company and to set clear goals for its success.

“In the space we’re occupying there hasn’t been a company that has done what we’re doing for the Caribbean-American community,” said Thompson, a popular South Florida personality. “With the help of the SBDC at FIU we’re finding our way, developing a business plan, finding investors, and figuring out our next steps.”

Blondie Ras specializes in creating original television content designed to open a window into Caribbean culture. As a new company working with a limited budget, Thompson explained that getting off the ground wasn’t easy.

The seven-part series “Taste the Islands,” which debuted in April 2015, became the first Jamaican-produced and hosted program to air nationwide on independent PBS stations and on Create TV. “Island Origins,” which debuted in late 2015, is broadcast in South Florida on BECON TV. Previous projects have aired on South Florida’s SFL-TV, The CW and on cable stations throughout the Caribbean.

“We need to give investors, and ourselves, a clear picture of what we want to do over the next few years to grow the business and make it a viable company,” Thompson said. “We needed to address what we’re trying to achieve, how our investors are going to make their money, and what our end-game will be.”

Thompson, whose background is in art, architecture, interior design and singing, learned about the SBDC at FIU from a friend who had worked with the group. In early 2015 she applied online for assistance from the organization.

“They took care in pairing me with a consultant who knows about this particular industry,” Thompson said. “He gave me guidance, confidence, clarity, and focus. It wasn’t a hand-holding exercise, I had to do my homework.”

The transition from artist to business owner was one of the biggest challenges Thompson faced, getting caught up in the creative component and not paying enough attention to “the business of your business.”

The SBDC at FIU consultant made Thompson take a serious look at the industry landscape, identify how Blondie Ras plans to give customers the value they need, and determine how the business will grow.

“It made everything very real –what are you going to do with the investments you get, how are you going to satisfy that investor, how is money going to come back into the business,” Thompson recalled. “We worked on turning the business into a real business, not just running it as something that creative people do.”

Today, Thompson’s focus is on connecting with potential investors. The tough questions have been asked and answered, forms have been filled out, the must-have steps have been taken, and Blondie Ras’ pitch deck is nearly finished and already attracting attention.

“I’m really impressed with the status of the business and with growth in myself,” said Thompson. “I know the investment is coming and a lot of that has to do with the tutelage I received from my SBDC at FIU consultant.”