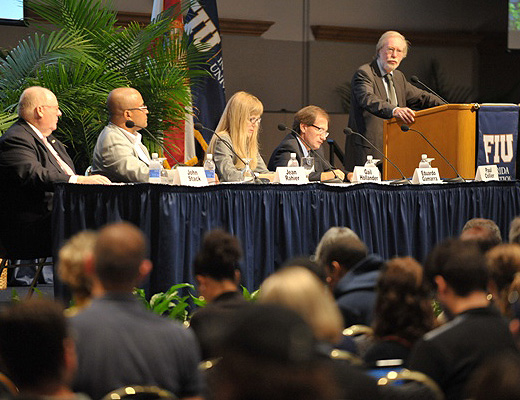 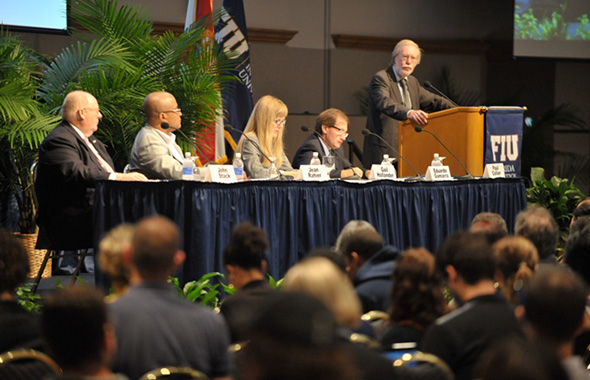 What do business, secured data and international relations have in common? Just about everything these days.

The importance of those links will shine on March 8 at FIU’s Geopolitical Summit. The one-day event, titled “The Dark Side of the Web,” is sponsored by FIU’s Steven J. Green School of International and Public Affairs (SIPA), with the support of the College of Business. It will be held at the Graham Center Ballrooms. Panels will focus on civil liberties, national security, and emerging cyber threats to enterprise security.

Among those leading the conference is College of Business Senior Lecturer David Wernick, whose background includes both business and international relations.

Wernick, who will moderate one of the panels, pointed to a news event to illustrate the growing nexus between technology, business and geopolitical forces.

The 2014 Sony Corp. hacking scandal saw the entertainment giant’s emails and financial information spill into the open. North Korea is widely believed to have launched the attack after the release of the satirical movie “The Interview,” which skewered North Korea leader Kim Jong-un.

“We thought it was a very interesting issue at the center of business and international affairs that showed the vulnerability of private companies to hostile cyber attacks from rogue nations,” said Wernick, who teaches international business and strategy classes.

“A growing number of private sector and government jobs will be related to cyber security; it is a growth area,” Wernick said, citing risk management and legal aspects of computer and data security. “Bad guys are very enterprising and resourceful and have sophisticated tools and schemes for hacking into systems and accessing proprietary data including credit card information and medical records. Retailers, banks, hospitals, and universities are clearly in the crosshairs and have to up their game.”

The issue also impacts entrepreneurs and start-ups that are increasingly conceived from the get-go as “born global,” or transnational.

From the inside out.

Wernick has a unique overview. He grew up in Massachusetts where political consciousness was part of family lore – his father’s high school classmate was Gov. Michael Dukakis.

After earning his bachelor’s in political science at Tulane University, Wernick lived for six months in Costa Rica. A scholarship to FIU’s Masters in International Studies program brought him to South Florida. Particularly attractive was the university’s Latin America focus. Later in New York he worked for groups including the Council of the Americas. Wernick and his family returned to Florida in 2000. A job with the Ackerman Group, a risk analysis firm, sent him across the Americas.

By 2011, he had earned a Ph.D. in business administration from FIU.

This year’s Geopolitical Summit reflects how closely intertwined practical business concerns and political and development interests can be – especially pertinent at FIU with its Latin American focus.

“Part of the emphasis for the conference is to focus on Latin America, and where they fit into cyber security,” Wernick said. “Latin governments and companies, generally speaking, are not at the same level of preparedness as their U.S. counterparts and urgently need to enhance their cyber resilience. I think this dialogue has particular relevance for them.”

Panelists and guest speakers at the Geopolitical Summit include former Under Secretary of Defense for Policy James Miller; NPR security correspondent Dina Temple-Raston; and Robert Knake of the Council on Foreign Relations, among others.

The March 8 conference runs from 9 a.m. to 5 p.m. in the School of International and Public Affairs Board Auditorium, SIPA 125 on the Modesto A. Maidique Campus, 11200 SW 8th Street Miami, FL 33199. For more information go to Geopolitical Summit | The Dark Side of the Web: Challenges to Security, Prosperity and Privacy or call  305.348.7266