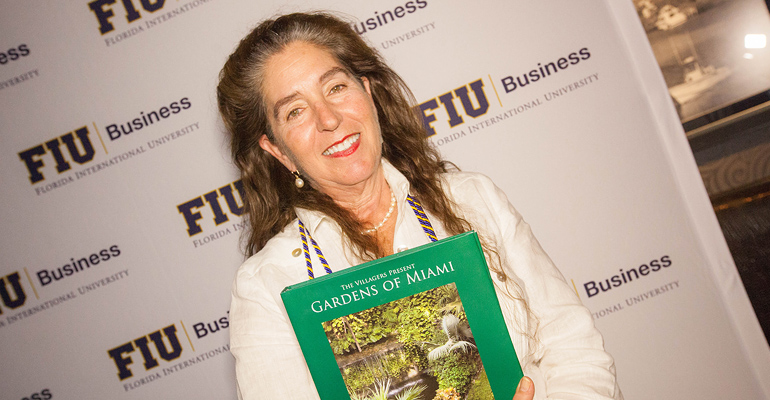 This spring and summer has been a harvest of achievement for Julie Petrella Arch. In July she earned her Master’s in International Real Estate from Florida International University’s Hollo School of Real Estate, a challenging, accelerated program.

While working toward graduation from the College of Business, Arch was also finishing up an award winning book, “Gardens of Miami,” a collaboration among members of The Villagers, a historic preservation group. Arch was project co-chair, co-writer and editor of the richly visual volume published in March.

For Arch, the world of commercial real estate and the intelligence behind arranging trees, shrubs, flowers, art and architecture are intertwined. The book, she said, “is meant to instruct, property-by-property, on the biodiversity of Miami-Dade County.”

How people view their space reflects on real estate as a whole, she added. “What we are doing in our own backyards affects everybody – there is connectivity in what we do.”

Building in the blood.

Arch’s father was a developer and engineer in the Northeast and she grew up around construction projects. She earned a Business and English Literature degree from Florida State University, where she met her Miami-native husband. She worked in the Miami office of Cushman & Wakefield as a commercial appraiser and analyst, stepping away in the early 2000s to spend more time with her young children. She also started a property management and construction consulting company.

Long a staunch environmentalist, she was now able to pursue her interest in sustainable gardening and South Florida’s unique ecosystem. She has volunteered at Fairchild Tropical Botanic Gardens for over a decade as a member of the horticultural staff and leading ethnobotany walking tours. As Arch’s knowledge about native flora grew, she shared her expertise with the community, lecturing, helping start edible gardens, and consulting on civic and school projects, “from Carrolton and Pinecrest to Overtown and Liberty City.” She became a fierce advocate of the urban greening movement, which incorporates plants and landscaping into commercial design not only for aesthetics, but to boost buildings’ energy efficiency, use fewer natural resources and, if well done, attract birds, insects and other creatures that contribute to a healthy ecosystem.

Arch earned the Master Gardener certification from the University of Florida, and has served on a number of civic organization boards, including the Coral Gables Green Task Force, Habitat for Humanity of Greater Miami, and as director of the Edible Community Gardens Project.

Last year, she decided to it was time to become current in the commercial real estate field. “I really wanted to get up to speed, and back to the world I used to function in,” she said. “I want to return to the world of commercial, institutional-grade real estate in a different and more impactful way.”

FIU’s program, she said, was the perfect choice, with professors using real-world cases that allow students to practice what they are learning in class. That approach especially stood out in the development courses taught by Hollo School Director William G. Hardin, she said. “In class we had to find a piece of land, buy it, build on it, lease it, stabilize it and then sell it,” she said. Decisions had to be justified with a written analysis.

The high point of the program, she said, was captaining the four-person FIU team invited by MIT for the semi-final round of its rigorous CASE Competition, advancing alongside institutions that included Columbia, Cornell, Harvard and Yale. “It was thrilling,” she said.

“What was nice about our class,” she added, “is that we had people from many different aspects of the world of real estate.”

Now, with the program finished and the book behind her, Arch wants to combine her professional practice with her commitment to incorporating trees, shrubs, ground cover and blossoms as a central element in real estate – especially as developers and contractors awaken to how green space impacts property values, urban sustainability and the psychological well-being of the population. “The book and what I do is another way of looking at real estate,” she said. In the final analysis, “Both are about the land. That can take many, many different forms.”