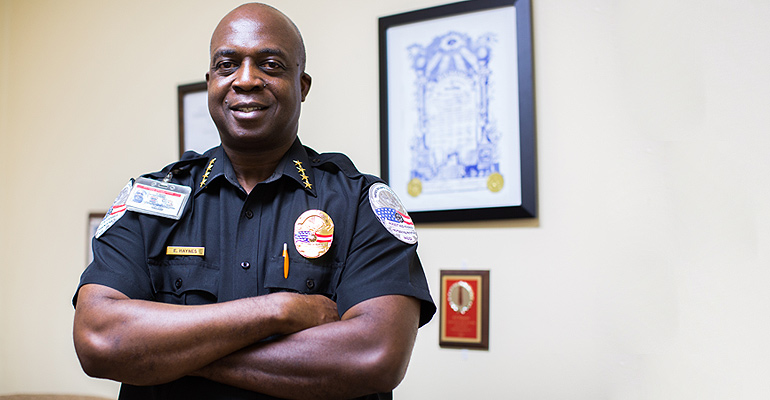 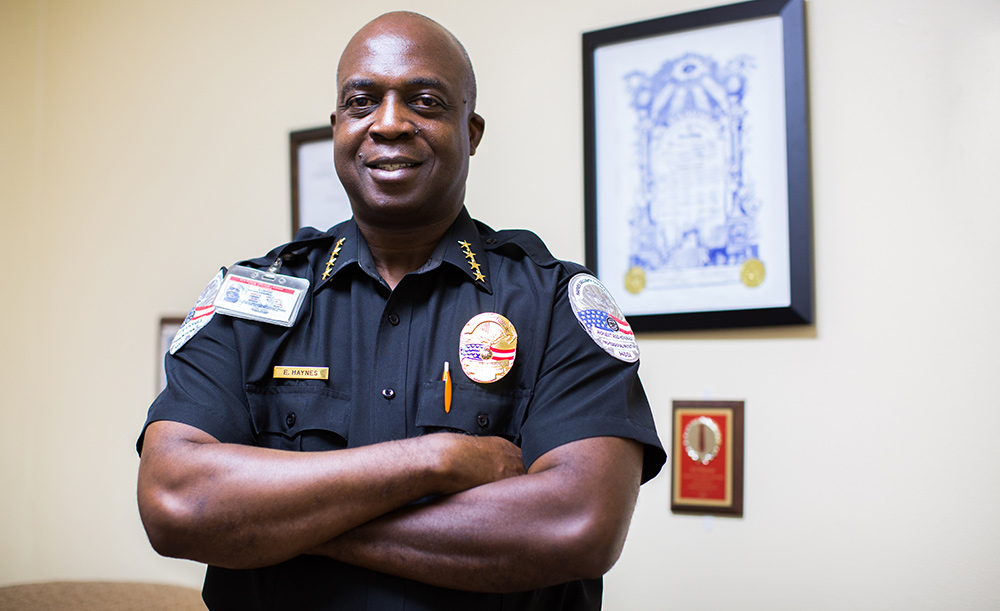 Edward Haynes has been in law enforcement for more than 30 years, having served as a U.S. Marine as well as the first black police officer in the Village of Miami Shores. His can-do attitude, gratitude and get-the-job-done aptitude clearly show through when he speaks.

Haynes is the founder and CEO of Haynes Security Services with headquarters in the heart of Miami’s Liberty City neighborhood.

The business opened in 2011 and U.S. Rep. Frederica Wilson was among his first clients. Haynes Security Services has since expanded to provide security for real estate development companies, at events and the Miami-Dade Metrorail, which transports 1.6 million riders a week. His company also trains guards to obtain the appropriate licenses and certificates.

“I started with a grand total of one (employee), and now we’re up to 30 officers,” said Haynes, noting the awesome responsibility of providing for 30 families, including that of his own two daughters. Additionally, his wife is the CFO.

However, surviving in the highly-regulated security services industry can be tough, especially when competing against big national companies — and those who bid low for contracts. Further, after a contract is awarded and the work is done, reimbursement of expenses can take more than 30 days and exhaust a small business’ resources.

Knowing the importance of being prepared, Haynes searched for answers. That’s when Congresswoman Wilson referred him to a consultant at the Florida SBDC at FIU, the small business development center at Florida International University’s College of Business.

“Through their helping me with the technical aspects of developing the business, we needed to get some financing,” he said. “They referred me to the Miami Bayside Foundation and, between all that, we’re a match made in heaven. That has helped to sustain us and help us to grow.”

Haynes added that the Florida SBDC at FIU has inspired him and given him the insight he needs to run the business and move forward.

“The consultants are very knowledgeable, very patient, very helpful, and the network of support system that is provided by the SBDC is second to none,” he said. “I’ve never seen anything like it. As a matter of fact, if I hadn’t experienced it, I wouldn’t have believed that it was even there or possible.”

Among the areas in which Haynes has found help from the Florida SBDC at FIU: maintaining contracts that have been awarded.

“Without having the mindset, the background, the understanding of working with the SBDC, it’s totally impossible,” Haynes said. “I can understand why most small businesses fail because they don’t have that type of mentorship and tutoring that I have been fortunate enough to obtain through the SBDC.”

He cites as an example having to write a profit and loss statement to get a bank loan. Access to capital consultants at the Florida SBDC at FIU know the local bankers, what different banks seek and what needs to be included in the loan application process.

“Because of your affiliation with the SBDC, [they] are going to look at you a little differently than somebody who just walks in the door,” Haynes said. “So, when I say ‘network,’ you get a total package. It’s basically a cocoon of individuals who are there to support you, and wherever you are weak, they build you up so that you can enter the door prepared to do business.”

Recently, Haynes Security Services won a prestigious SBA award when he was named the South Florida District and State of Florida Veteran Owned Business of the Year for 2017.

Entrepreneurship can provide many more opportunities than working for someone, he said.

It’s no wonder then that he also gives motivational speeches to kids. When kids say that they want to be a famous celebrity or athlete, Haynes opens their eyes to a different world.