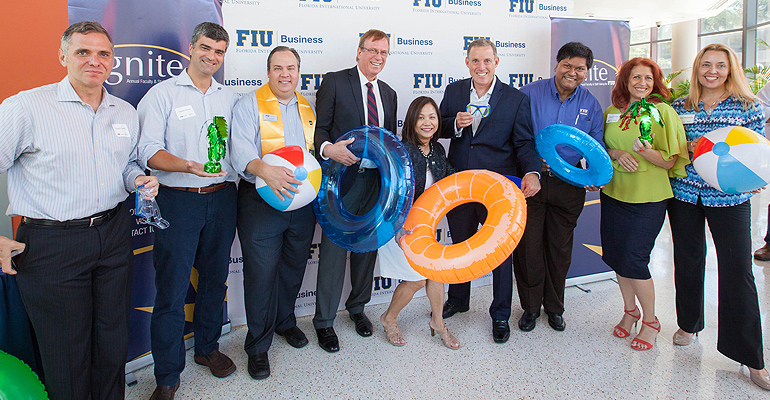 Shortly after Dean Joanne Li came to the College of Business in May 2017, she issued a challenge to faculty and staff: help us demonstrate our commitment to the college by participating in Ignite, the university’s annual faculty and staff fundraiser. As of late May, only 33 percent of the college had donated to Ignite, which supports over 120 different FIU initiatives, including scholarships, student activities and faculty research.

At an ice cream social on May 31, Li introduced herself, brought up faculty campaign co-chairs William Hardin and Tim Birrittella, and announced a 30-day dash toward a strong campaign finish. She set a goal: 50 percent participation by the close of the campaign on June 30, a higher participation rate than the college had achieved in the five years since Ignite began.

Thirty days later, that goal was left in the dust.

With 293 faculty and staff members, the College of Business achieved 100 percent participation. It was first time in FIU Ignite history that a degree-granting college put its full support behind the campaign.

“I am overwhelmed by your show of commitment,” Li told members of the college. “Through your participation, each and every one of you has made a statement: we will put our own resources behind the work we are doing at the College of Business and FIU. This is a very powerful message.”

Achieving full participation came from a concentrated effort that included a sharp focus on the purpose of the Ignite campaign, ongoing strategic reminders to donate, and the invocation of a healthy dose of competitive spirit.

Ignite: a single campaign in support of FIU’s many goals.

“What was really great about this year’s campaign was that people were educated on what Ignite is really about,” said Yanyn San Luis, interim director of Alumni Relations for the college, who led the initiative. “It’s just a matter of participation, to show that, as faculty and staff, we are engaged in our mission.”

Birrittella, a faculty member in the Department of Marketing and Logistics, found that in the course of sending out personal emails and speaking to colleagues, he was able to discover why people hadn’t yet participated. Many had seen Ignite emails and meant to donate, but never followed through. A few strategic nudges over the course of 30 days helped get more participants on board, he said: “We all lead busy lives, and sometimes, we just need a reminder or two.”

The next step was education. Ignite allows participants to earmark their pledge, which gave participants the confidence that their money would support the goals they chose, rather than go to a general fund. And as they learned that there was no minimum amount required to participate, those who couldn’t afford a large donation were able to set aside their concerns and donate.

By mid-June, a handful of departments started to register 100 percent participation. That started a new phase.

Each week, as the college’s Ignite leadership team received the lists of participants from the university, they reached out again. Some departments were close to 100 percent; others were running below average. The team called in department directors and chairs to help bring participation up. It was an effective strategy.

“We’re all a little competitive here,” Birrittella said. “Everyone wants to achieve. No one wants to be left behind.”

By the final days of June, as the goal of full participation by each department became within reach, colleagues were urging each other to donate. Yet no one expected the news of 100 percent for the entire college.

“When we got the news, it was so good to know that not only did we exceed our goal, but we also exceeded our expectation,” San Luis said.

Steve Fain, chair of the Ignite campaign, praised Dean Li’s leadership in helping to set the new Ignite record. “Her enthusiasm was contagious, and her leadership team of Professors Hardin and Birrittella, with the support of Yanyn San Luis, worked tirelessly,” he said. “Congratulations to the faculty and staff in the College of Business for proving once again that, as President Rosenberg has stated many times, ‘At FIU we turn the impossible into the inevitable.’ ”

For Hardin, director of the Hollo School of Real Estate, one of the first departments to achieve 100 percent participation, the Ignite campaign represented a unique opportunity: uniting to meet a challenge. “Both faculty and staff are sending a strong positive message of support of our mission and commitment to our community,” he said. “This is a great result driven by many people.”

Li praised the campaign leaders for rallying the staff and faculty around a critical goal. In the coming year, she said, she looks forward to sharing this example of commitment to the college with the wider community.

“Full participation makes a powerful statement: we stand 100 percent behind FIU and the College of Business. We are fully committed to the work we do,” she said. “I am thrilled to send the message of our achievement out to our community.” She thanked campaign co-chairs Birrittella and Hardin for their initiative and hard work each day into getting full-participation.

“I enjoyed the campaign,” said Birrittella, faculty advisor to the AMA chapter at FIU, who pledged his donation to the Student Enhancement Fund. “No one likes asking for money, but asking for participation to support the College of Business? That’s an easy ask.”