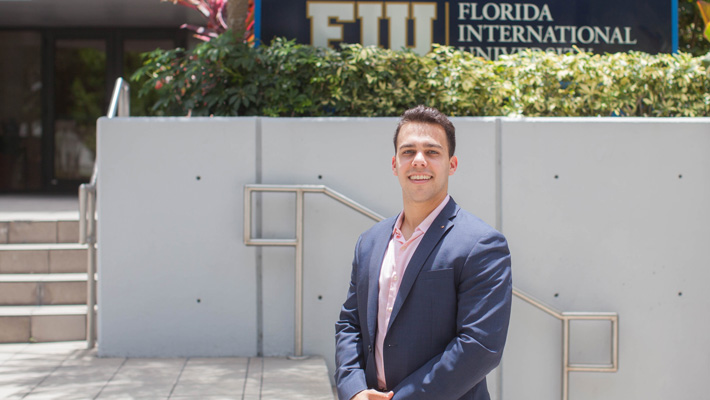 Daniel Perrino, who graduated this spring with his bachelor’s in accounting from Florida International University’s College of Business, didn’t know what to think when he was asked to report to the office of Ruth Ann Mc Ewen, director of the School of Accounting, in early May.

Yet his concerns were assuaged in the nicest way when Mc Ewen presented him with a $10,000 scholarship, bestowed on Perrino by the Public Company Accounting Oversight Board, better known as the PCAOB.

“I was super happy,” said Perrino. “It really moved me.”

Perrino was nominated by the FIU faculty, who passed his name on to PCAOB, the Washington, D.C.-based entity that oversees public company audits. In 2011, PCAOB began offering scholarships to a select group of students – last year they numbered just over 70 — funded from PCAOB-assessed penalties.

Like many an FIU student, Perrino began his career at Miami-Dade College. He moved to Miami from Venezuela five years ago, and, despite at first speaking no English, a few years later had earned his associate’s in business administration. He then transferred to FIU.

Meanwhile, there was sadness. Soon after moving to the states, Perrino’s mom passed away, a blow to his close-knit family that was particularly hard on Perrino and his brother, who also lives in Miami and attended FIU. But it didn’t stop either of them.

“Our grandfather, dad and mom taught us to get up from things like that,” he said.

“Hard work really does pay off,” Perrino said. “You probably don’t see it when you are working hard, but it pays off in the end.”

Perrino also proved he is willing to step up when necessary, said Jimmy Carmenate, clinical instructor in the School of Accounting. When the person slated to assume the BAP presidency after Perrino unexpectedly declined, Perrino agreed to stay in the position for another semester.

“That’s a huge commitment and it’s very rare,” Carmenate said. Beyond being great academically, Carmenate said, Perrino has been a mentor to other students. “He is well deserving of the scholarship.”

In the fall, Perrino, who is spending his summer at a fulltime internship at PwC, formerly Pricewaterhouse Coopers, will be back at FIU to begin the accounting master’s program. At the same time, he expects to prepare and sit for the CPA exam.

The scholarship will make a huge difference, he said, in part because international students have fewer scholarship opportunities. Still, he said, it’s the recognition of his efforts and backing of the faculty that will stay with him.

“I really appreciate my time at FIU, it’s a great university,” he said. “It’s the people. From colleagues to staff, they have all been like family. I’m very happy about the connections I’ve made and the people I met and worked with. They have all been supportive.”