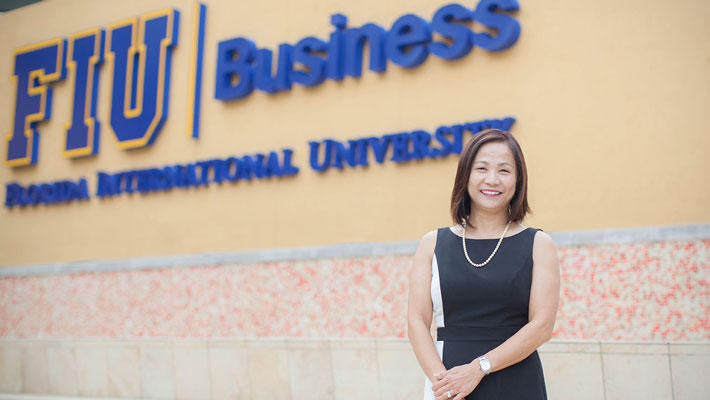 The hurricane forced Li, brand-new to Miami, and her family to crisscross south and central Florida, heeding evacuation orders from both Miami and Naples.

“It was pretty stressful,” Li said after the storm. “It was my first hurricane experience in Florida; I don’t recall what I was doing when Andrew struck.” She discovered that her skills in strategic thinking, planning and community-building helped see her and her family through the storm.

Putting up storm shutters on her home was definitely a challenge, she said, taking two days, as neither she nor her husband had ever done it.

With the shutters up, they planned to ride out the storm at home. Those plans changed on Thursday September 7, with the mandatory evacuation order for their neighborhood and other areas of Miami-Dade County.

Their first destination: Naples. “We wanted to buy time and stay ahead of the storm,” said Li. “That was our strategy, to have more certainty about the direction of the storm.”

They settled at her in-laws’ second-floor Naples condo by the beach and planned to remain there through Irma’s visit.

“My daughter told us that she had so many fond memories there that she felt at ease,” said Li. “We bought supplies and got a good night’s sleep, woke up the next morning and got more supplies.”

But that same day, Friday September 8, brought another mandatory evacuation order, this time for Naples as well as Marco Island and Fort Myers.

Li was ready. “Forty-eight hours ahead, I had started planning, calling friends, and one in Kissimmee had kept his rental condo vacant for us to use,” said Li. “So on Friday, we drove there.”

It was there that she and her family rode through the storm. Irma’s eye didn’t cross into any Central Florida counties, but the region received strong winds and heavy rain. The wind, Li recalled, was the scariest. “It was really loud, and I couldn’t sleep much.”

She is now back at her Miami home, picking up after the storm. Her house suffered some damage, she said, but nothing that can’t be repaired.

While picking up debris alongside her neighbors, she felt the warm welcome of her new home. If Hurricane Irma delivered a positive, Li noted, it was the sense of community she was able to build with her new neighbors.

“We initiated a plan: to ask our neighbors for their phone numbers, and set up a group chat to stay connected with each other if anyone needed help,” she added. “We rekindled that sense of community, of seeing neighbors as friends.” That’s something she hopes will extend throughout South Florida.

Li also expressed her gratitude for the concern of her FIU family, noting that College of Business staff and faculty had reached out to her throughout the week to ensure that she was safe. “I am tremendously grateful for the kindness of our staff and leaders,” she said. “Irma was tough, but our community is tougher.”