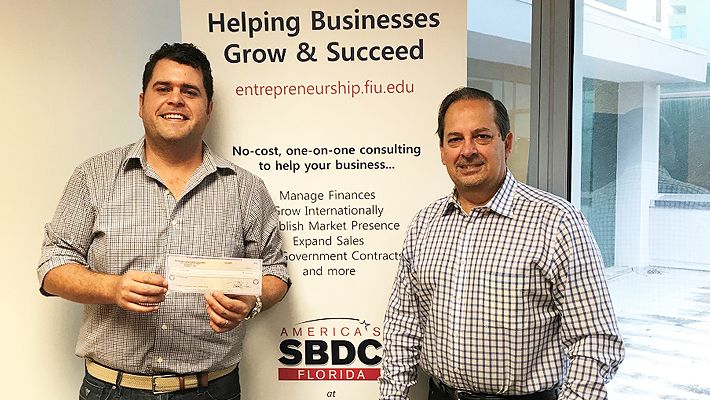 As Hurricane Irma threatened to strike South Florida in September 2017, thousands of business owners scurried to secure not only their homes, but also their businesses.

Among them was Tony Anderson, whose company, Miami Seaplane Tours, provides aerial tours of South Florida, including the Florida Keys. His business also includes charter services throughout Florida and the Bahamas.

With the storm cutting a raging path throughout the Caribbean and vertically up Florida, it was no surprise that the company’s airplane hangars were badly damaged, as were its docks and seawalls.

“The physical damage was easy to see, but the economic or operational damage was more widespread,” says Anderson.

With the help of the Florida SBDC at FIU, Anderson was able to obtain a disaster loan that helped minimize the impact the storm had on his business.

His was among 187 storm-impacted businesses assisted by the SBDC at FIU, the small business development center that is part of Florida International University’s College of Business. In all, the center helped local businesses obtain more than $2.5 million in disaster loans because of damage caused by Hurricane Irma.

“As Hurricane Irma showed, Miami-Dade businesses need to have a game plan and procedures to weather business interruptions,” says Brian Van Hook, associate director of the Florida SBDC at FIU, who oversees the center’s business continuity services, including disaster response and cybersecurity threats.  “We look at it not just as a question of business survival but also that it could make your business more competitive in the long run.”

Helping businesses prepare for and recover from disasters

At the beginning of each hurricane season the center organizes workshops to teach business owners how to prepare for disasters. In 2016, the SBDC at FIU worked with the FIU Extreme Events Institute to create Bizaster, a mobile app that helps business get back up and running after a disaster.

After a catastrophic event hits, a key concern for businesses is how to obtain funds to help them recover from any losses. Within days after the storm, the SBDC at FIU began reaching out to businesses to tell them about the resources available to them. The center also conducted a disaster recovery webinar two weeks after the storm hit.

The more than $2.5 million in capital secured by local businesses with the SBDC at FIU’s assistance was part of the Florida Emergency Bridge Loan, a state program created specifically to help businesses recover from catastrophes. In the event of a disaster, the governor has the option to activate the short-term loan program by executive order.

In addition to the Bridge Loan, the center also helped businesses seeking disaster funds from the U.S. Small Business Administration and from resource partners such as lenders that created programs specifically to help storm-impacted businesses.

For businesses like Titan Lumber, a wholesaler that specializes in lobster traps, such response was invaluable, says company owner Eric Maradiaga.

The funds, he said, “helped us keep producing traps while fisherman rebounded from Irma.”

Maradiaga also used the money for a second work shift to be able to meet increased demand after the storm.

The company, he says, was “able to mass produce, to keep up with orders, doubling our production.”

About Florida SBDC at FIU