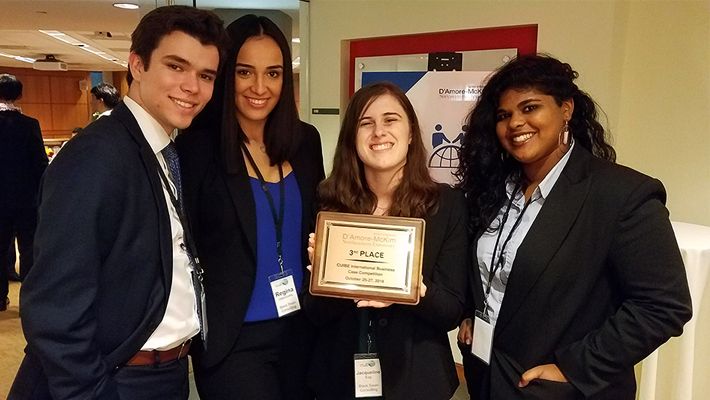 For nearly a decade, FIU College of Business teams competed at the NU-CUIBE International Business Case Competition and never made it past the first round.

FIU’s Black Swan Consulting was selected as tops in their four-team semifinal group, and went on to win third place among the 16 teams at the event, the Northeastern University-Consortium of Undergraduate International Business Education competition, held at NU’s D’Amore-McKim School of Business.

The FIU team emerged victorious through a combination of hard work, extensive practice and an approach that leveraged each individual’s strengths and the team’s ability to find solutions.

David Wernick, university instructor in the Department of International Business and faculty advisor, chose the team, consisting of Alberto Garcia, Jacqueline Kay, Swarnima Radhakrishnan and Regina Valenzuela, from his classes and study abroad programs. He credited Donald Roomes, university instructor at FIU Business’ Department of International Business, for helping him prepare the team for the competition.

“Case competitions are phenomenal opportunities for our students to apply the analytical and critical thinking skills they are learning in the classroom,” Wernick said. “They need to work collaboratively to solve complex problems with incomplete information under tight time constraints — and deliver their solutions with poise and confidence.”

As they worked together on practice cases, team members discovered their strengths and tuned in to how to leverage them as a team. Garcia, for example, was the speedy, go-to researcher. Kay was a PhotoShop whiz and master of quick facts. Valenzuela’s speed in reading and compiling facts allowed her to help others. Radhakrishnan, a veteran debater, brought skills in pulling presentations together and wrapping them up.

The team’s four practice cases included one that focused on Amazon’s decision on where to locate its second headquarters (HQ2). It was written by a colleague of Wernick’s, who listened to the team’s presentation via Skype and engaged with students for a critique. Another was a case that Wernick wrote himself about The Hershey Company’s challenge of making sure that the cocoa beans it purchases in West Africa for its chocolate bars are sourced ethically and without child labor.

After much practice, it was time to match wits against nationally-known business schools. After an early Thursday morning flight from Miami to Boston and a group dinner at the university, teams received their case. It dealt with Hilton Hotels and the challenge of combatting human trafficking in the company’s supply chain – a case that shared striking parallels to the Hershey’s case authored by Wernick. Teams had 24 hours to read the case, prepare a written analysis, and turn it in.

After changing into comfortable clothing, the group came together in a nearby coffee shop.

“We began to exchange ideas as to what we would call this program, and how we would make this plan realistic enough for Hilton to implement,” noted Valenzuela in her trip report. Garcia proposed the name H.O.P.E, which stood for Human-trafficking Ongoing Personnel Education. H.O.P.E.’s primary objective: to ensure all employees were able to accurately identify signs of human trafficking, and report and address the issue.

For most of the next day, the team put together their report, reviewing their materials, outlining their case and assembling the financials to support it. With the report submitted, the team got to work on the presentation they would make before the judges, using the skills they had learned at FIU and polishing their delivery.

After a much-needed night of sleep, on Saturday morning, the team presented their findings. After all presentations were done, the FIU team received the news they had longed to hear: FIU was the best of its group. The winless streak was broken.

After a second presentation by the four semifinalists, judges announced that FIU had placed third overall in the national competition, and the sense of accomplishment grew.

“We had put FIU’s name out there when we advanced to the semifinals for the first time. Now, everyone knew us,” Radhakrishnan said. “Placing third was the cherry on top.”

The experience left team members with new skill sets. Valenzuela said the experience improved her critical thinking and teamwork engagement, but felt it had a particularly strong impact on her presentation skills. For Radhakrishnan, “seeing what other schools were doing made me want to step up my game,” she said. “There’s so much more to be done.”

“It was an outstanding team effort and something to build on,” Wernick said. “Next year,” he added, “we are gunning for first place.” 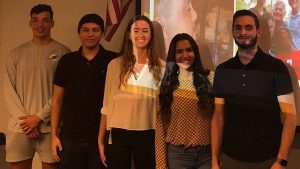 How to market during the COVID-19 crisis and the recession it brings.