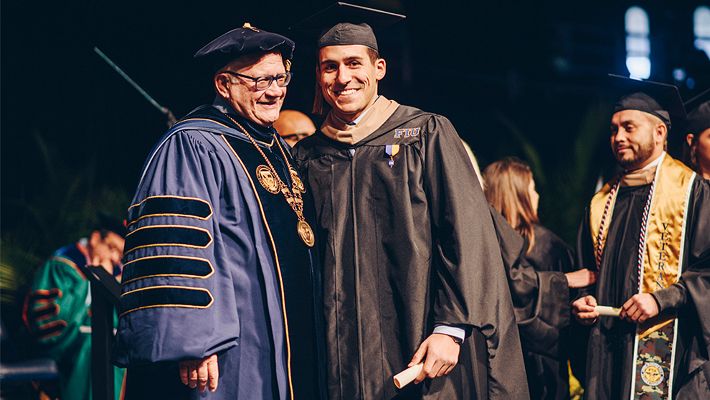 Perseverance is a word that binds five of the College of Business’ newest alumni. They have accomplished extraordinary things in their lives and during their time at FIU, often against great odds, making them “Worlds Ahead” graduates.

“Many of our students have shown they are Worlds Ahead by taking responsibility for improving our world,” FIU President Mark Rosenberg said during the ceremonies. “They have overcome challenges, demonstrated leadership, and helped improve the lives of others. They have changed lives!”

The FIU Business graduates were honored at the Fall 2018 Commencement ceremonies on December 11 and December 12, 2018. Established in 2010, FIU’s Worlds Ahead recognition goes to individuals with strong leadership qualities, a desire to change lives and a record of academic achievement.

Bryan Duran has always been headstrong. When he was diagnosed with multiple sclerosis in 2010, shortly after completing high school, Bryan started training for half and full marathons. He’s run many since then, including the New York City Marathon in 2013.

Academically, Bryan didn’t slow down either despite extended hospital stays and episodes of losing his motor skills, as well as the ability to see and speak. He received a bachelor’s degree from FIU in 2017 and went directly for the professional MBA.

The economic challenges overcome by his parents have been a driving force for Bryan since high school and seeing himself in that position wasn’t an option. Bryan has a ready answer for those who question why he wanted to pursue a graduate degree: a better future.

Five years ago, Donovan Carter had a newborn daughter but did not know how he would provide economic stability for her. It was his turning point, pushing him to pursue a college degree. Now 34 years old, Donovan received a Bachelor of Business Administration as his daughter, Lydia-Rei, watched.

Donovan also was tired of working what he describes as horrible jobs where the pay did not match his specialized skills. A veteran of the U.S. Navy, Donovan served six years providing immunizations, dermatology care and physical therapy to military personnel.

After getting out, Donovan registered at FIU’s College of Business, combining his interest in e-commerce and sports marketing with the latest technology. Determined to secure the career he never started right after high school, he plans to combine his independent work pursuing employment in e-commerce or marketing at sports franchise.

During his deployment in Afghanistan with the U.S. Marine Corps, Cyrus Caines learned firsthand about perseverance. There, somewhere in the foreignness, with the intense focus and hard work, he also had an enlightening and reflective moment: a better understanding of his ambitions, and what he wanted for his future.

As determined as he was at age 18 to join the Marines, he firmly resolved to obtain a higher education from FIU to ensure a better future for himself and his family, especially his young siblings. Today, the 26-year-old, originally from Jamaica, has earned his bachelor’s degree as an accounting major and will pursue a master’s degree in data analytics.

KPMG, one of the Big Four accounting firms, has offered Cyrus a position after graduation.

Jaime Weiser was born blind. Officially diagnosed at age four, she endured three eye surgeries over four years, with constant drops, patches and treatments. By the age of eight, she could see, with the help of prescription lenses, but had no depth perception. As a student, she required double the time to complete assignments and has lived with the potential relapse of irreversible blindness.

Yet these obstacles never stopped Jaime. In fact, they inspired her. At FIU, she received a Presidential Scholarship and was admitted to the Honors College. She finished her coursework in less than four years with a 4.0 GPA.

She plans to follow in her grandfather’s path as an educator and advocate, someday becoming a Dean of Students or Title IX Coordinator.

Chadesh followed his father’s long family lineage into the Hindu priesthood. He was invited by President Obama to the first White House Hindu Temple Leaders Conference in November 2014, the youngest of 50 delegates to attend.

Inspired by his family’s passion for education and achievement, Chadesh received his bachelor’s degree from the University of Central Florida and became a stockbroker.

Through a nine-month move to Texas to build a startup stockbroker team for Charles Schwab & Co., and back to Orlando, he continued FIU’s online Corporate MBA program and earned his MBA.