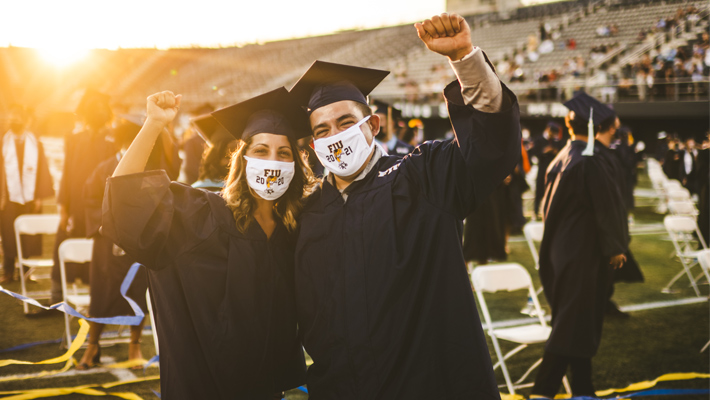 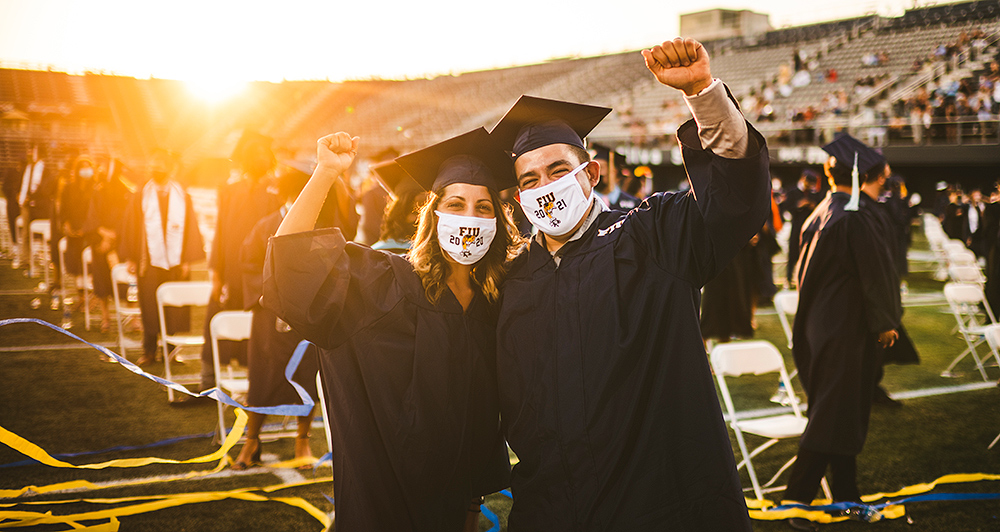 The six ceremonies welcomed both 2021 graduates and those who graduated in 2020 through virtual ceremonies. They were held Saturday, April 24 and Sunday, April 25 at Riccardo Silva Stadium on FIU’s main campus, and followed COVID-19 safety guidelines including a strict capacity limit of 1,000 graduates per ceremony.

Corey A. Hancock proudly represents the United States as a foreign service officer by following his calling to help build better lives and communities around the world. After undergraduate and graduate studies at Florida Atlantic University, he joined the Peace Corps, working in a small village in Bolivia to help orphans learn workforce skills and improve production of a cooperative of women weavers.

He then began a career with the United States Agency for International Development (USAID), starting with a post in Peru. In Kazakhstan, he advocated for the rights of the disabled. In Côte d’Ivoire, he worked to fight the scourge of HIV/AIDS. In Pakistan, he managed nearly $1.6 billion in bilateral U.S. foreign assistance. During that time, seeking to add financial management skills to his portfolio, Hancock enrolled in the FIU MBA program, finishing his coursework in spite of a ruptured Achilles tendon that forced him to evacuate to Singapore for surgery.

He is now pursuing a PhD at France’s ESCP University where he will look at corporate social responsibility and how it is implemented around the world.

Yet she started her freshman year with a heavy heart. Her younger brother died by suicide a month before she arrived in Miami. Depression and anxiety marked much of her first year. Yet through it all, she looked to her brother’s memory to achieve the big goals they once created together.

By her sophomore year, Caldwell made a turnaround at FIU. That year, she was hired as marketing assistant at the Frost Art Museum. When she wasn’t in class, studying or working, she was focused on her true passion, fashion.

Yet a second tragedy awaited Harris. During summer 2019, her dad’s health began to decline, and he passed away that December. Although she struggled emotionally, Harris’ resilience helped her cope with the loss of her mentor and champion. By the spring ’20 semester, she earned an intern position at New York Fashion Week, and was also hired as assistant brand strategist at the luxury, black-owned footwear label, Keeyahri.

After graduating with a double major in international business and marketing, Harris will begin a digital marketing and branding internship with the global luxury footwear brand Stuart Weitzman (NYC).

As an enlisted infantry Marine stationed in Kings Bay, Georgia, Christopher La Forte took note of the respect shown to the college-educated officers, and vowed to one day earn his college degree. Today, having turned his admiration into action, La Forte has overcome numerous obstacles to earn not one but two degrees as he prepares to enter the professional ranks.

But, again, he faced a hurdle, developing excruciating pain in his shoulder that was eventually diagnosed as Parsonage-Turner Syndrome, a rare neurological condition. As a Marine not accustomed to showing emotion, La Forte would cry in pain while studying. But he powered through and began to improve with physical therapy.

Now set to begin a new job as an assistant manager at Sherwin Williams, La Forte recently married fellow grad Maria Pereira, a Deloitte CPA. He credits his Colombian mother, who came from nothing to achieve business success, for attaining his goals.

Determination and helping high school and college students excel are at the center of Tivia Rouland’s personal and professional life.

While working as an aid in the Miami-Dade County Commission, she established partnerships with local businesses to offer guidance and hands-on experience for local students. In 2017, Rouland founded Unknown 365, a non-profit organization that helps schools in Miami-Dade County obtain scholarship money for their students.

One of the MBA lessons that stuck with her, Rouland explained, is the need to distinguish yourself from other businesses. “I can apply it with aviation, with my non-profit,” she said. “How can we do different things if we have to do the same thing?”

Elizabeth Shipman developed a passion for organ donation and transplants nearly a decade ago. She joined the Miami Transplant Institute, part of Jackson Health System, five years ago and has been manager of the placement and preservation department for the last two.

A South Florida native, Shipman enrolled in the Healthcare MBA program in 2020, focused on enhancing her strength in business operations and strategic planning, both key to expanding her skillset and opening new opportunities in the field of organ donation.

Shipman says she’s been able to incorporate the program into her day-to-day work, applying what she was learning into the real world. Strategic management and quantitative analysis courses have been particularly helpful, and organizational behavior instruction has opened her mind as to how people behave.

In June, Shipman will move to Las Vegas to join the non-profit Nevada Donor Network. As director of the organization, she will be responsible for coordinating, recovering and allocating donated organs, working with both families involved in the process.