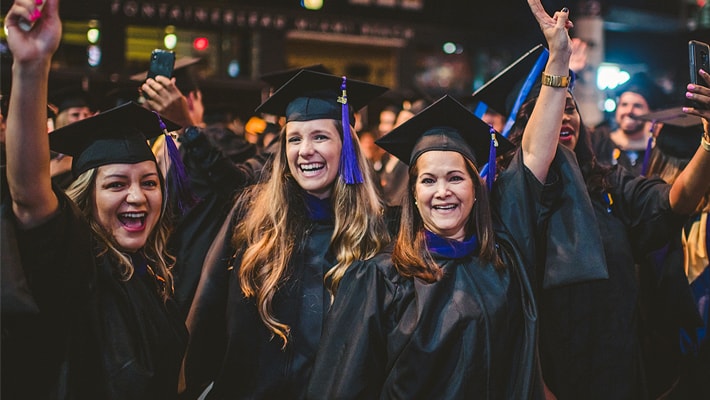 At a morning ceremony for the Chapman Graduate School of Business, more than 525 master’s and PhD degrees were awarded. They included faculty member Jaclyn L. Tanenbaum, who received a PhD for her dissertation, “The Shift from Conspicuous to Inconspicuous Consumption and the Messages Hidden in Plain Sight.” At afternoon and evening ceremonies for the Landon Undergraduate School, more than 850 students were awarded degrees.

Students honored as “Worlds Ahead Graduates.”

President Rosenberg singled out six FIU Business graduates as Worlds Ahead for overcoming obstacles and forging a path to success.

A self-described perfectionist, Renee Smith began high school at age 10 and graduated when she was 14 in her native Jamaica, arriving in South Florida at age 17. Financial difficulties forced Renee, a mother of two, to put her college education on hold for nearly two years. An early job in medical records led her to make correction centers the hub of her career. She’s been working in correctional healthcare since 2005 and is now a health services administrator at Broward County’s main jail. In 2017, she completed her undergraduate degree in supervision and management while working in the jails, and has now added the Master of Science in Health Informatics and Analytics to her credentials.

When Melissa Bassett was a teen, her best friend was pronounced brain dead and passed away. The experience left Melissa wondering why her friend couldn’t get better, spurring her interest in neuroscience. She conducted her own research to study the neuroplasticity of neurons so she could better understand the potential for neurons to regenerate. Seeking an advanced degree and to merge her interests in medicine and research, Melissa enrolled in FIU’s health informatics and analytics program, and she co-founded a health informatics company, Storm Informatics Inc. She also formed a nonprofit foundation to advocate for suicide awareness.

To Jessica Mobassaleh, her older brother Fouad was Superman. When he died suddenly at the age of 23 from heart disease that doctors had insisted was benign, Mobassaleh and her family partnered with the Nicklaus Children’s Hospital Foundation to offer free pediatric electrocardiogram testing to prevent this from happening to others. The foundation also created a medical symposium to educate professionals and raise funds and was selected to be a part of the World Congress of Pediatric Cardiology and Cardiac Surgery in Washington, D.C. in 2021. With the help of the foundation, Mobassaleh has also reached out to local schools to educate staff and ensure there are plans in place for students and athletes in case of an emergency.

At the age of 12, Kimberly Carvalho’s world changed abruptly. She was living in Florida, the daughter of two successful Brazilian-born entrepreneurs, when her parents received the final denial of their green cards. Kimberly, who was born in the U.S., moved to Brazil with her mother. Determined to return to the U.S. for college, she moved in with an uncle during her last year of high school, sleeping in the living room and working long hours to provide for herself. With the help of her guidance counselor, she received admission to FIU, along with three scholarships. After graduation, Kimberly hopes to use her entrepreneurial skills to build her career and run an international business of her own.

Ana Perez has always been driven. She traces her determination to 7th grade, when she faced and overcame a life-threatening medical condition. Interested in digital advertising, she met FIU alumnus Mauricio Angarita – founder of digital communications firm The Thumb Fighter – through the College of Business mentorship program, and he became her mentor. She landed an internship in NBC Universal Telemundo Enterprises’ marketing department and applied for a position in the network’s internal communications office. Ana hopes to stay with NBC and work with scripted dramas. She credits her mother, who always told her: “Others may say ‘no’ to you, but don’t ever say ‘no’ to yourself.”

Ariel Huguet developed a plan to convert gas-and-propane dependent food trucks to sustainable electric technology to help the environment and lower entry barriers for food entrepreneurs. With a background in restaurant work, the idea was a natural for Ariel, who once thought college wasn’t his path. But at age 26, working in the hectic New York City restaurant scene, Ariel suffered a stroke that changed how he thought about life. He came back home to Miami and enrolled at FIU. A rocky first semester wasn’t encouraging. But Ariel persevered, and graduated with a 3.6 GPA. FIU gave him a sense of home; professors helped revive his love of learning, and opportunities opened up. Ariel has been accepted to a master’s program in computer science at NYU.

Adrienne Danielle Bolden, program coordinator for Executive and Professional MBA programs, received her Master of Science in Mass Communications as well as a graduate certificate in Conflict Resolution and Consensus Building. She was honored as a Worlds Ahead Graduate at Commencement ceremonies for the College of Arts, Sciences and Communication Arts.

Lauren Douglas, student assistant at the Office of Marketing and Communications, received her BA in Psychology with a minor in Criminal Justice.

Lizbeth Gonzalez-Lopez, student assistant at the Department of Marketing and Logistics, received her BBA with a double major in Marketing and International Business.

Marling Landero, graduate student research assistant in the Department of Global Leadership and Management, received an MS in Organizational Science.

Julio Leon Penate, student assistant to the President Emeritus, received his BBA, double majoring in International Business and Logistics and Supply Chain Management. He served as the Banner Marshall representing his graduating class.

Angelique Rios, student assistant in the Chapman Graduate School of Business, received her BBA with a double major in International Business and Management. Her new position is Disney College Program Cast Member at The Walt Disney Company.

Andres Rojas, junior graphic artist in the Office of Marketing and Communications, received a Bachelor of Fine Arts.