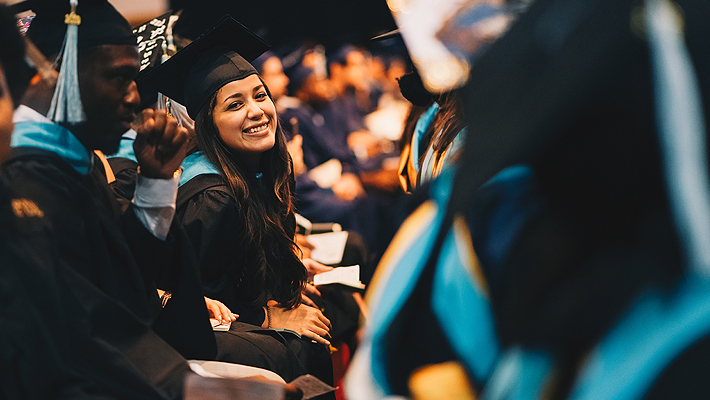 A proud audience of friends, family and faculty members watched as nearly 1,000 FIU College of Business students received their degrees at the Spring 2019 commencement ceremonies on April 28, 2019 at the Ocean Bank Convocation Center. More than 225 scholars of the Alvah H. Chapman Graduate School and about 750 scholars from the R. Kirk Landon Undergraduate School were awarded degrees from the college.

Also at the April 28 morning ceremony, Cesar Conde delivered advice to the graduates. The chairman of NBCUniversal International Group and NBCUniversal Telemundo Enterprises, who is responsible for the operations and international expansion of company business outside North America, encouraged the graduates to believe in themselves.

“Today is exhilarating because you’re launching yourselves into a multitude of possibilities fueled by the power of a fine education,” he told them, later adding, “Digital technology can do the work of hundreds of people, but no advancement comes without the work of an extraordinary person.”

The ceremonies also recognized five FIU Business Worlds Ahead honorees, accomplished students who met unique challenges in the course of their lives.

Raymond Wu’s entrepreneurial spirit comes from his Chinese immigrant parents. Raymond started his own business in high school, collecting sneakers and selling them for a profit. He later helped launch online company Sneakheat to provide a safer way to make transactions. After becoming interested in the rare car export business, he signed on as a sales representative for Wheels Boutique to learn and market himself. Next up: a master’s degree in finance from the University of Miami.

Yuray Rodriguez came from Cuba with only the determination to build a new life. The 16-year-old enrolled in a Miami high school aiming for a career in aerospace. After attending the Honors College at Miami Dade College, where he founded two community programs focusing on children and education, he studied mechanical and aerospace engineering at the University of Miami. He came to FIU for his business education and graduated from the Executive MBA program. Last year, he achieved his dream of working in the aerospace industry as the supply chain team leader at aviation company AAR.

Though Amanda Jimenez didn’t speak English when she came to Miami from Cuba at age 9, she believed in limitless opportunities here for hard workers. Raised by a single mother who instilled in her that despite their low income, she was never less than anyone else, Amanda appreciated social responsibility. She volunteered at Miami nonprofits helping underserved children and people with disabilities, and she interned with the socially responsible Libra Group. She is the first in her family to graduate college, and plans to use her FIU Business education to help market socially responsible companies.

Back home in Romania, Ioana Orlaie cultivated the land in the middle of nowhere, bullied by other kids for her religion. Ioana and her identical sister left their parents and eight siblings for the city in search of an education, and when she’d saved $3,000, she left to start a new life at FIU. Though battling a heart condition that has resulted in a pacemaker, Ioana maintained a 4.0 GPA and will return to FIU for a master’s in management information systems.

Shortly after Luiz Pereira came here from Brazil, he began ice skating. After an injury took him out of Olympic figure skating competition, his passion for finance led him to FIU. A founding member of the College of Business Dean’s Student Advisory Board, Luiz worked as a learning assistant in FIU’s mathematics and statistics department and he helped start stock research platform Algo-nomics. Luiz hopes to apply his skills in machine learning to other fields like alternative energy and real estate.

Jessica Castillo, program coordinator in the Department of Marketing and Logistics, received her Master of Public Administration (MPA) degree. She also received her BA in International Relations from FIU.

Christopher Chamorro, student assistant at the Office of Development and Alumni Reclations, received a BBA, double majoring in Management and Human Resource Management, with a certificate in Social Media and E-marketing Analytics.

Jonathan Lopera, student assistant in the Global Sales program, received his BBA in Marketing. He will be starting a new job as AVP, business consultant at Bank of America Merchant Services.

Andrea Zacarias, student assistant in the Office of Finance and Administration, received a BBA in Marketing.