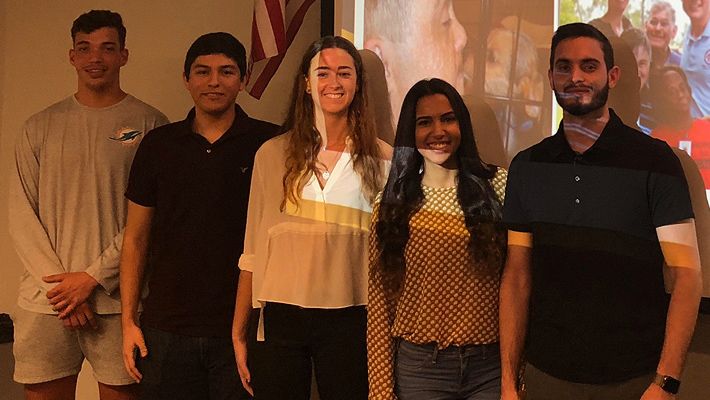 “I learned there is a very big difference between saying you are going to work with an organization, and visiting and seeing what they are really about,” said Barreto, who graduated from FIU’s College of Business in December with a BBA.

It was exactly the kind of take-away Roomes was hoping for. Most companies engage in philanthropy, so it is no surprise that many business students are interested in non-profits. Yet Roomes’ approach goes beyond establishing interest. He believes interactions with the non-profit world can be a dynamic process that imparts leadership lessons. That’s why he dispatches his students into South Florida’s neighborhoods and their nonprofit organizations, “looking at society’s needs and understanding the process of how we organize the community to solve problems,” he said.

At MACtown, Barreto and his teammates focused on boosting the organization’s social media presence and fundraising. They set up a Facebook page and an Instagram account, which went from zero to 112 followers in two days. A new GoFundMe site allowed MACTown to reach more possible donors, while the team also reached out to previous donors.

Over the several years that he has been teaching the class, Roomes sent students out to many different organizations as part of what is known as service learning. This fall, however, he did something different, establishing a connection with The Miami Foundation, which administers Give Miami Day, a 24-hour online philanthropic event designed to raise money for a host of charities, ranging from educational non-profits and hospitals to animal welfare concerns.

Roomes and his class chose 10 organizations already under the foundation’s umbrella. The professor initiated first contact in order to give students more time to plan and execute their projects in advance of Give Miami Day, which spanned midnight to midnight on Nov. 15, 2018.

“The students could immediately make contact, go on a tour and ask the manager questions,” Roomes said. “They (the organizations) already had a funding goal and I wanted the students to have a sense of fundraising for a typical foundation.”

The students worked in small groups on proposals, which included business and fundraising plans, establishing time-sensitive goals, and spending a significant amount of time at the chosen non-profit. They had to present their work to the full class as part of their final project.

“Once they get their hands dirty and have a better handle on what is going on, they have a better understanding of self and goal, and can ask questions about the partnerships between business and society,” Roomes said.

Of particular help, noted Roomes, was Director of WOW Relationships and Development Anay Abraham. The WOW Center offers support, guidance and encouragement to adults with developmental disabilities in order to help them become more independent. “She provided the initial framework for engaging the non-profits, being a director of a non-profit herself,” Roomes said, noting that she also provided critical support for each team based on her prior experience working with the Miami Foundation. One student team also worked alongside the Wow center.

Serena Jones, who is double majoring in business management and marketing, worked with her teammates for the Seed School of Miami, a public college-preparatory residential school aimed at low-income families. Seed had a website and social media, but they wanted Jones and her teammates to boost awareness. “We helped them with that, and they were able to double (over last year) the funds raised on Give Miami Day,” Jones said. She sent the information to friends via social media, to the Facebook page of her sorority (Sigma Kappa), and to group chats.

“It’s about getting other organizations involved. It’s all about networking,” she said.

At course’s end, she had a new appreciation of supporting the non-profit community. “Even if you don’t have so much time, try to spare a little,” she said. A simple ‘follow’ on Instagram or sharing with your personal network makes a big difference, she added.

This year’s class also had help from website maker Wix, which not only provided website construction coaching, but offered website builder certification if certain guidelines were followed.

The partnership with The Miami Foundation worked out so well that Roomes plans to incorporate it in next year’s class, and hopes to identify non-profits even earlier so students have even more time to develop and implement their plans.

Students may not realize that, as they are helping out, they gain transferable business skills. But Roomes knows it.

“The difference between a social entrepreneur and a traditional entrepreneur is not very much,” Roomes said. “The cause and will is to empower students to get involved and use our collective juices for solving problems and finding solutions.”