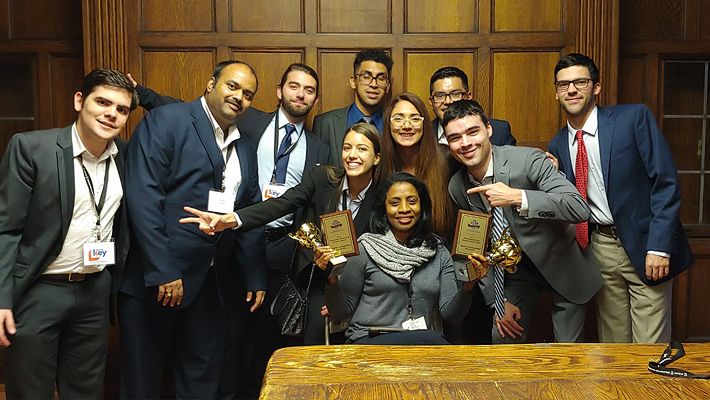 Members of AIS@FIU entered this year’s national competition in Philadelphia as one of the relatively “new kids” on the block, a young chapter eager to make its mark.

They left as champions, coming away with four awards: first- and second-place finishes in team competitions, and two additional recognitions for chapter achievement. 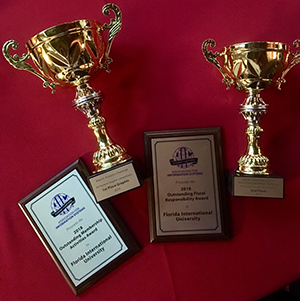 An FIU undergraduate team placed No. 1 out of 10 teams in graphics/visualization, one of two categories awarded. An undergraduate-graduate blockchain team, formed just weeks before the challenge, placed No. 2 in the nation.

The event, held April 11-12 at Temple University’s Fox School of Business, featured 181 delegates from 33 universities across the nation. FIU faculty coaches watched with pride as their students handled tough questions from corporate judges with poise and confidence, overcame a slew of technology challenges to build and present a working blockchain, and won top awards for chapter activities.

Karlene Cousins, chair of the Information Systems and Business Analytics department, noted that FIU’s new ATOM Analytics Challenge was conceived as a mechanism to inspire students as they prepared for the AIS competitions, with sponsors providing valuable feedback and support for the chapter’s trip to the national event.

“We have world class faculty, brilliant students and a high quality information systems and business analytics program,” she said. “I knew we could crush our competitors. We just had to mobilize our resources.”

She praised the contributions of ISBA faculty coaches Gladys Simpson, Nicole Wishart and Lina Bouayad, who accompanied the team, as well as Paulo Gomes, Debra VanderMeer and Min Chen for additional coaching at FIU.

For students, “it was amazing to see everyone’s reactions at the end of the conference, when FIU kept getting called up as award winners,” said Keith De Jesus, business analytics major and member of a winning team. “Every step of the way, we had the support of the faculty. Together, we put FIU on the map.” 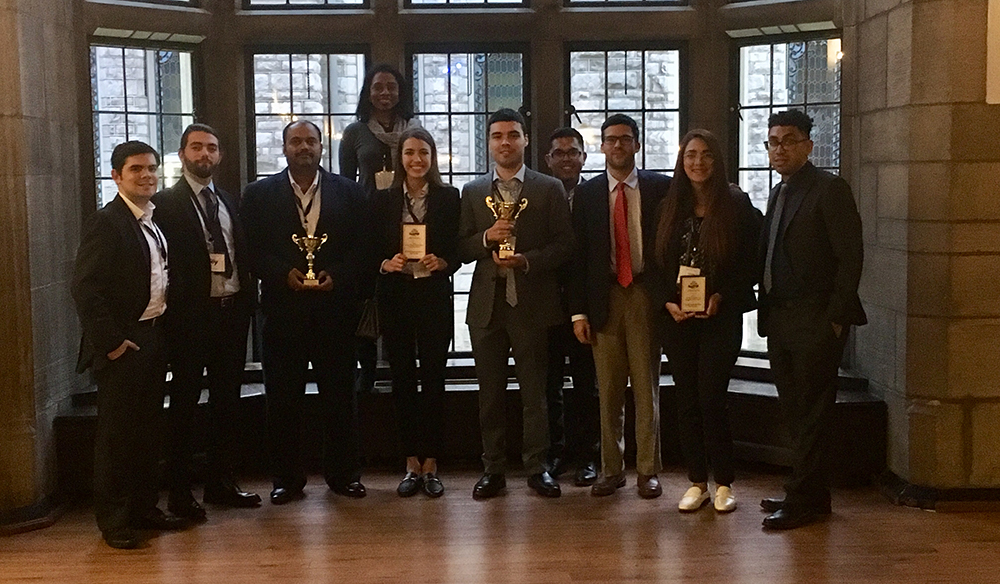 Telling the story of the data leads to victory.

After winning FIU’s ATOM Analytics Challenge in February, Keith and his brother Kevin, a computer science major, knew they had to refine their presentation, which analyzed millions of pieces of pharmaceutical data to select an underdeveloped category of disease, to compete nationally. They enlisted classmate Jose Perez, a finance and business analytics major with strong workplace experience in analytics presentations.

Competition in the category was fierce. Out of 42 competitors from 17 universities that submitted online analyses to present at the national finals, only 10 teams were chosen, including FIU’s De Jesus-Perez team. Simpson and Wishart continuously coached the students, zeroing in on the demands of the competition. With only six minutes to present their case, the data story they told would have to be compelling and concise. And in a four-minute question and answer session, the national judges would be demanding.

The students rose to the challenge, practicing extensively with their coaches and rehearsing dozens of times each day before the conference. Practice and persistence paid off. 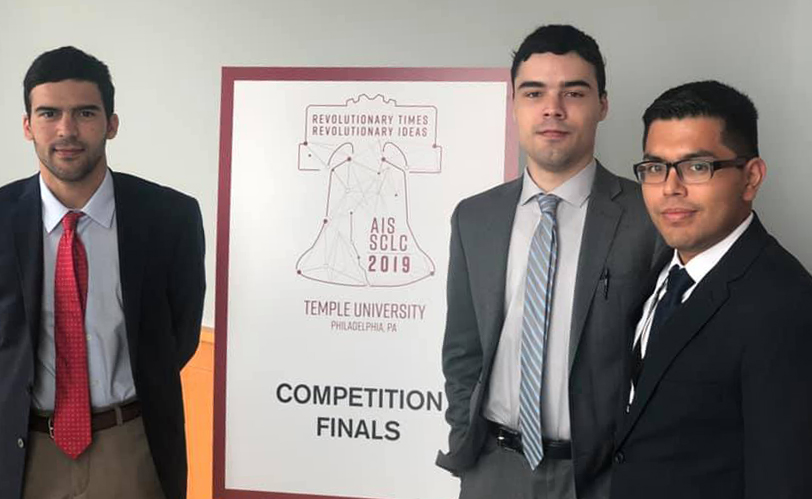 “When our name was announced for first, we were in shock for about five seconds,” Perez said. “They had to call it twice.”

The impossible task: building an integrated solution with blockchain and deep learning in time for the competition.

The AIS competition project involved designing and building a blockchain for a farmers’ cooperative selling directly to consumers that would allow full transparency throughout the chain, from the farmer raising livestock, to a consumer seeking proof that a cow had been raised and fed organically.

The FIU team also wanted to go beyond the challenge. They researched and found an IT solution that would identify missing livestock in drone images, and added this to the blockchain.

Challenges abounded. For one, none of the team members had ever built a blockchain or deep learning models, and they had to demo the entire solution with its user interface in front of live judges.

“We had to run from the very beginning,” Pineda said. “We had to build it, troubleshoot it and run it.” In addition, Bouayad noted, since blockchain is such a new technology, there isn’t a technical repository with available online help, as there is with more established languages.

After a tremendous effort of learning to build a blockchain from scratch, FIU finished second in the competition, with a sense that they could have won, and great deal of pride.

Pineda said the team managed to pull off its accomplishment by understanding the strengths each team member had, and organizing functions so that everyone could pull their weight.

“Dr. Bouayad guided us completely on how to put it together”, he said. “We were really excited to get the judges’ feedback. Just finishing and knowing it worked was pretty rewarding.”

For the executive board of AIS@FIU, founded in 2015, the national conference was an opportunity to showcase new strides. In the past year, they focused on growing a network and showcasing career opportunities.

Members of the Spring 2019 executive board of AIS@FIU–President Guillermo Ortega and vice presidents Luisa Gama Rodrigues and Patricia Ventura—presented a panel on best practices in student/alumni engagement, in cooperation with AIS members from Temple and the University of Florida. FIU students spoke about the organization’s weekly workshops led by faculty members, which helped students learn and deepen their grasp on analytics tools and techniques beyond classroom learning. The chapter also hosted company presentations and initiated a social Alumni Night, giving students the opportunity to build networks with graduates of the program that are now working in the field.

The culmination of a year of hard work came with the announcement of two chapter awards for FIU, for membership engagement and fiscal responsibility.

“It was really great to get FIU’s name out there in front of so many people,” said chapter vice president Rodrigues, who will be interning in Goldman Sachs’ New York audit department this summer. She noted that many AIS student chapters at the conference had long histories and as many as 300 members.  “To have just started this chapter in 2015, and be winning national awards in 2019, is pretty amazing.”

With the competition behind them, students shared trips around Philadelphia and other celebratory events. 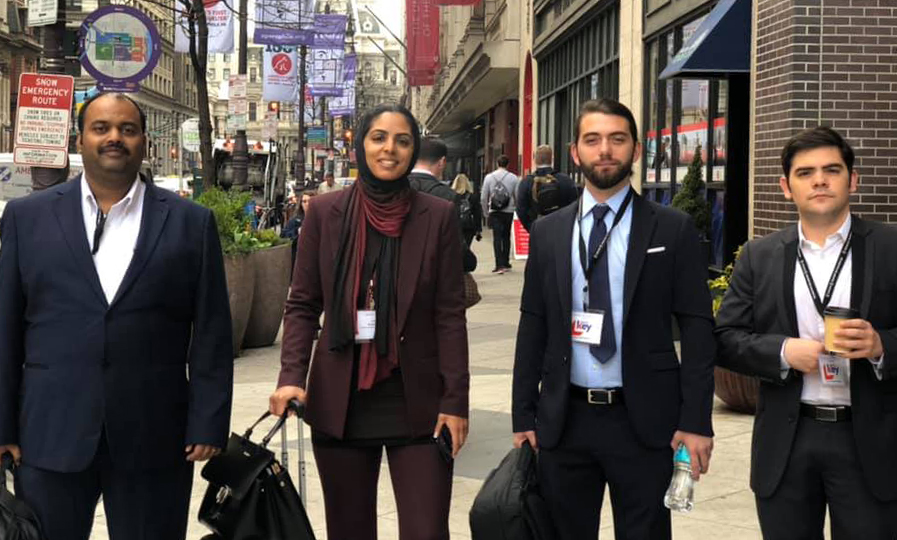 “It was a great opportunity to bond as a team,” Perez said.

At the breakfast for faculty advisors, “I kept hearing how well FIU had done,” Simpson said. “We were the talk of the conference.”

“It’s going to be a challenge to keep up our name,” Simpson said. “But more importantly, I’m proud of how much our students grow and learn through their participation in these engagements. That’s what we’re all about at FIU.”

For FIU Business Dean Joanne Li, the victories were a valuable proving ground.

“FIU Business recognizes data analytics and Blockchain technology are crucial to business education,” she said. “We are committed to supporting our students as they participate in experiential learning such as the AIS competitions.

“We are proud of the ISBA faculty for taking a lead in incorporating technology into our curriculum, and for leading the transformation of business education to prepare our students for the next decade of placement,” Li said. “We are over-the-moon excited about our students’ success.”