On July 1, 2009, the Center for Leadership at Florida International University (FIU) found a new home: within the College of Business Administration’s building complex.

It’s a perfect fit. Just as management forms a central part of the college’s orientation, so, too, does leadership.

“As more and more organizations seek ways to develop and train their high potential individuals to become leaders and change agents, research on leadership characteristics and competencies has become more important than ever,” said Mayra Beers (MA ’95), the center’s administrative director. “Our work focuses on developing research strategies and leadership models, and in applying that research in the form of executive leadership development programs.”

Since becoming fully operational in 2005, the center has conducted an annual “Florida’s Women-Led Businesses Survey,” a report that has garnered significant media attention. It also has sponsored several research projects from which future center and business school programs will draw. The first resulted in a leadership development tool, and another produced research about the insularity of CEOs.

In addition, the center has developed and presented two executive development programs. “Leading Decisions,” launched in 2009, focused on strategic decision making. Sixteen C-level executives from more than 10 companies participated in the initial offering. A second program, “Women on the Move,” is based on the center’s leadership development tool, and has been delivered to high potential women executives from more than 10 countries across a variety of industry sectors.

When Modesto A. Maidique concludes his tenure as FIU president, he will become the center’s executive director. He has recently completed a working paper outlining the behavioral model of leadership decision making (BML), which formed the foundation for the “Leading Decisions” program. Joyce Elam, the executive dean of the business school, serves as academic director and program director of “Women on the Move.” 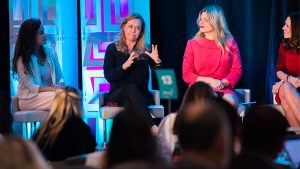