Both the Finance and Real Estate Department and the Department of Management and International Business provided colleagues from across Florida International University (FIU) the chance to flex their intellectual muscles during two seminars held on November 6, 2009.

“The ‘Out-of-sample’ Performance of Long-Run Risk Models,” delivered by Wayne Ferson, University of Southern California, drew about 25 finance faculty and PhD students as well as faculty members from the School of Accounting and the Department of Economics.

“Ferson makes an extremely useful contribution because there is still a wide opening for finance research in the area of what predicts return in the long run,” said Suchi Mishra, a member of the Finance and Real Estate Department, Knight Ridder Center Research Professor and organizer of the department’s seminar series. “Because we are living in one of the worst financial crises since the Great Depression, we have to have improved intuition on which risks matter the most in explaining returns on assets.”

According to her, Ferson’s research shows that the “simple Capital Asset Pricing Model (CAPM), which brought a Nobel Prize to its developers, is still the winner.”

Chockalingam Viswesvaran presents on the subject of “Emotional Intelligence.”

Later that day, a group of more than 20 faculty members and PhD students learned about “Emotional Intelligence” from Chockalingam Viswesvaran, professor and director of the industrial and organizational psychology graduate program at FIU. Aya Chacar, a member of the Department of Management and International Business, organizes its seminar series. 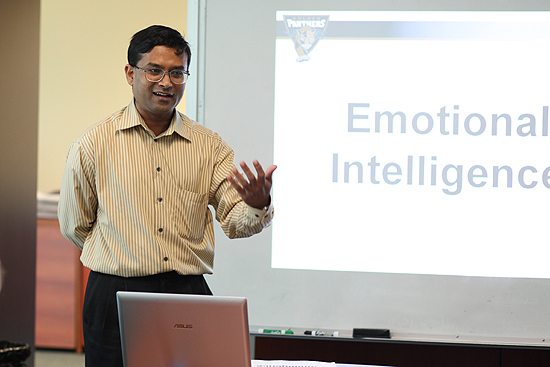 “I thought his discussion of the notion of emotional intelligence was very interesting,” said Juan I. Sanchez, Knight Ridder Byron Harless Eminent Chair of Management in the College of Business Administration. “He defined it as the ability to identify emotions in oneself and in others, and to act accordingly.”

The topic generated a lively discussion based on the presentation.