With the recent release of the World Bank’s “Doing Business 2011” report, Latin America and the Caribbean have much to cheer about with more advances than declines in key categories of conducting business. Mexico and Peru scored highest—first and second place, respectively. For Mexico, the achievement was a much needed shot in the arm, in light of the fact that most recent shots have been exchanges between drug cartels and the cartels and police, with many civilians being caught in the crossfire. In the case of Peru, its notable accomplishment is testimony to the government’s hard-nosed recognition that high commodity prices (minerals, in this case) may well boost GDP to close to double-digits, but this feat is irrelevant to the reality of doing business in that country on a day-to-day basis. 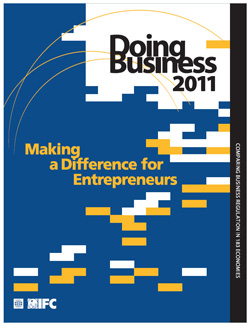 The “Doing Business” reports are a more useful barometer for business people and a practical guide for policymakers than macroeconomic assessments and projections of fiscal and monetary policy, interest rates, trade balances and the like. “Doing Business” focuses on the electrical circuitry and plumbing of actually doing business.

Nevertheless, before Mexican government officials crack open the bottles of tequila and their Peruvian counterparts pour themselves large glasses of pisco sours to celebrate, they need to be mindful of the fact that in the world’s increasingly globalized and competitive, knowledge-based economy, the ease by which a working-class Lima resident can open a nail salon or a multinational mining company can gain a permit for expanding its copper extraction operations are necessary but insufficient measures of business competitiveness. In the 21st century, sound macroeconomic policies and a hospitable business environment must be enjoined by innovation—processes, products and services. In that regard, Latin America and the Caribbean lag badly.

The “Global Innovation Index” produced by INSEAD, a leading European business school, highlights the region’s poor performance. No Latin American or Caribbean country is listed among the top 25 in the index. Among more than 100 countries, the highest scores go to Costa Rica (41) and Chile (42), followed by Barbados and Trinidad and Tobago. Brazil comes in at 68, Mexico 75 and Venezuela 124 (near the bottom of the rankings).

For the region to develop an “innovation-enhancing culture,” it must first improve the building blocks of innovation: education, scientific/technological infrastructure and research partnerships. At the university level, enrollment in science (including computer science) and engineering is lower as a percentage than that of OECD countries, Asia and a number of Central European nations. As for technology infrastructure, university and independent research labs are poorly equipped and few in number, comparatively speaking. Scientific papers, patents and doctoral graduates are subpar—insufficient to broadly stimulate innovation. Government support has been frugal. The region’s R&D spending as a percentage of GDP is between one-half and one-fourth that of nations like South Korea, Taiwan, Israel and Canada—all hotbeds of innovation. There are far too few research partnerships between universities and the private sector; and where they do exist, it is multinational firms that lead the way.

The situation is not entirely bleak, however. There are rays of sunshine. In early November, GE announced the launch of a $100 million global research center in Brazil that will employ 200 engineers and research scientists. With its innovations in deep-sea oil exploration, aircraft manufacturing and agriculture, Brazil is the clear leader in innovation in Latin America. Achéflan, a plant-based anti-inflammatory drug and Rizoflora, an agrotoxic made of fungi instead of petrochemical products are other breakthrough innovations. The federal government itself allocates $20 billion annually to support innovation, and the country maintains a network of municipal incubators and innovation centers. Examples from other countries in the region illustrate the scope of innovation: Studio A in Guatemala, a small entrepreneurial firm that produced the digital media for Hollywood’s The Chronicles of Narnia; Oncobiomed, a Chilean biotech company that has pioneered new cancer treatments; Teravision Technologies, a Venezuelan software development company firm dedicated to business solutions; and EB Partners, a Mexican company, involved in SAP applications to solve business process technology problems. These last three firms recently made pitches for next stage financing at the Americas Venture Capital Conference organized by FIU’s College of Business Administration.

Whether financed by government, private firms themselves, venture capital or angel investors, innovation is the next frontier, the next challenge for Latin America and the Caribbean to compete successfully in the global economy and improve the economic condition of its citizenry.

This column originally appeared in Latin Business Chronicle on November 16, 2010.