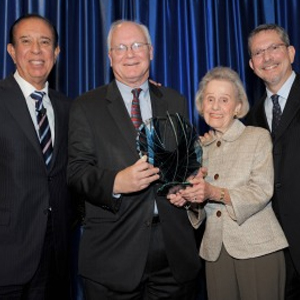 Calling for a new generation of leadership that will inspire a community to transcend personal differences to serve others, David Lawrence Jr., former publisher of The Miami Herald, delivered the keynote address at the first annual Chapman Leadership Lecture, an event presented by Florida International University’s (FIU) College of Business’ Center for Leadership (CFL).

“Each of us does have within us the power to get things done—good things, powerful things, things that transcend our lives,” he told the gathering of more than 350 students, faculty and community members at FIU’s Graham Center ballroom. The inaugural lecture honored the legacy of civic leader Alvah H. Chapman Jr., whose widow Betty, daughter Dale Webb and grandson Aubrey Webb (BA ’98) attended the event.

Lawrence told how he drew inspiration from Chapman, who focused his efforts on the “least, last and lost,” including the homeless and the community devastated by Hurricane Andrew. An ardent advocate for the education of young children, Lawrence now leads the Early Childhood Initiative Foundation and the Children’s Movement of Florida.

The evening was also an opportunity to remember Chapman’s vision and wisdom. FIU President Emeritus Modesto A. Maidique, CFL’s executive director, recalled a time early in his FIU presidency when he was approached with a once-in-a-lifetime opportunity: becoming the first Hispanic Presidential Cabinet member. Seeking advice, he called Chapman, who reminded him of his five-year commitment to FIU.

“He told me, ‘Your only decision is whether you’ll be true to your commitment,’” Maidique said. “Alvah always zeroed in on the heart of the matter.”

In addition to the Alvah H. Chapman Jr. Graduate School of Business, the Chapman family’s support of FIU has been integral to many aspects of the university’s ability to provide higher education to the Miami community.

“Alvah felt it was his duty to serve not only his company, but also his community,” said Betty Chapman. “Once he set his mind to doing something, he was going to get it done, but his most important objective was always to encourage people to work together.” 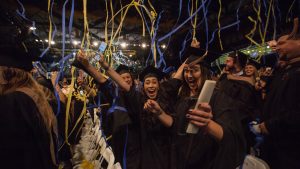