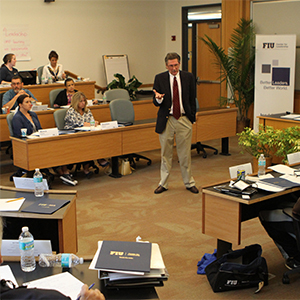 An article by Min Chen, clinical assistant professor, “Intended and Unintended Consequences of Minimum Staffing Standards for Nursing Homes,” coauthored with David Grabowski at Harvard Medical School, will appear in an upcoming issue of Health Economics. The findings in the article have been cited by McKnight’s Long-Term Care News, MDLinx and Center for Medicare Advocacy.

Chen was also quoted in a June 8, 2014 Miami Heraldarticle by Nick Madigan entitled “Doctors’ dilemma: Physicians consider ways to thrive economically — and sometimes even to survive.”

An article by Rich Klein, Knight Ridder Research Fellow and associate professor titled, “Understanding Online Consumers Ties to Merchants: the Moderating Influence of Trust on the Relationship between Switching Costs and Loyalty,” was published recently in the European Journal of Information Systems.

Monica Chiarini Tremblay, interim department chair and associate professor, and Debra VanderMeer, associate professor and Knight Ridder Center Research Fellow, hosted the 9th International Conference on Design Science Research in Information Systems and Technology in Miami, Florida in May, 2014.  Also, Tremblay was appointed to the editorial board of Production and Operations Management, a journal by UT Dallas and Financial Times.

Two articles by Jerry Haar, professor, have appeared in the Miami Herald recently. The “My View” column on April 27, 2014 was written by Haar, with the title “Leadership: the key ingredient to start-up success.” His article “Why We Need Common Core Standards” appeared on June 10, 2014. Also, Haar spoke on “Key Economic and Business Trends in Latin America and the Caribbean” at the United States Economic Relations in the Western Hemisphere” conference of diplomats and members of the intelligence community, sponsored by the U.S. Department of State and the National Intelligence Council on May 8, 2014.

Maria Garcia, assistant professor, was quoted in the SunSentinel article on April 25, 2014 entitled “In a crisis: do South Floridians help rescue or hit record?” by Johnny Diaz.