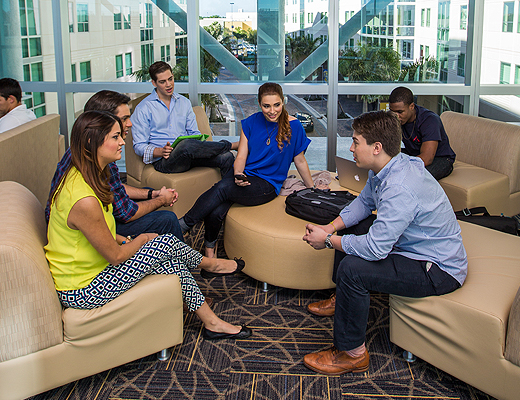 Janely Garcia (BBA ’09) has been named as a banking officer for TotalBank, where she also serves as lender and relationship manager. Most recently, she was senior credit analyst for Ocean Bank.

Orlando Oliva (BBA ’14) was promoted to assistant VP at TotalBank.

The Miami Lighthouse has hired Richard Fernandez (BAcc ’94) as chief financial officer. He will supervise the annual operating budget as well as all reporting and compliance. Previously, he was vice president of finance and senior corporate accountant for Banyan Health Systems.

Brian Matijevic (BBA ’08) has been named assistant vice president and treasury officer at U.S. Century Bank. He was previously an officer of treasury sales for Wells Fargo.

Maria F. Byrd (BAcc ’95) was recognized as one of 10 Hispanic women philanthropists at the first Mujeres Giving Back recognition luncheon.

Marcelino Pendas (MAcc ’08) has been named senior director and team leader for international wealth management at BNY Mellon Wealth Management. He will working with the international private client business with a view towards Latin American opportunities.

Patrick J. Khoury (BBA ’09) has been promoted by the commercial lending division at First National Bank of South Miami to vice president. His previous position was assistant vice president.

Amparo Bared (BBA ’82) has joined the board of directors of The Commonwealth Institute as the vice president of the Executive Committee. Her responsibilities include supervising the board, monitoring financial planning, and mediating board actions.

Appelrouth, Farah & Co., P.A. has added William Cuervo (B.Acc ’95) to their team as a tax manager. He will be training and developing accounting staff and conducting tax planning and research.

Ivan Garces (BAcc ’95), a risk advisory services principal at Kauffman Rossin Group, is now on the board of directors for Florida International Bankers. His specialties are international banking, finance and commerce, and anti-money laundering compliance.

FICPA Board of Governors named Ed Duarte (BBA ’98), an audit senior manager at Mallah Furman, to their board of directors.

David Monter (BBA ’04) has joined Professional Bank as vice president, controller. He will manage the accounting department, oversee regulatory reporting, and assist the CFO in financial reporting as well as asset management.

Peter A. Smith (BBA ’05) has been promoted to manager of Business Valuation Services at The Kaufman Rossin Group.

The Kauffman Rossin Group has promoted Adriana Corrales (BBA ’07) from supervisor to manager of Kauffman Rossin Fund Services LLC. She will be leading the Audit Liaison and Fund Dissolution departments.

Bruno Cevallos (BBA ’12) has been promoted to the Southeast Business Management Team at J.P. Morgan. He was previously a finance analyst in the Central Consumer Banking Planning & Analysis team.

EWM Realty International’s Brickell branch has hired Alejandra Libonatti (BBA ’91) as a broker associate. She previously worked at The Ritz-Carlton as the director of finance.

Jessica Bodie (BAcc ’03) was promoted from experienced manager to director by Grant Thornton LLP. She will be overseeing client engagements in a range of industries.

Daniel Jacobson (BBA ’06), a partner at Akerman LLP, was named to the list of Best Lawyers in America 2015 in the Mergers & Acquisitions Law and Venture Capital law category.

Onetti Sosa-Ceballos (B.Acc ’12) was promoted by The Kaufman Rossin Group to administrative manager. She was previously an assistant controller.

Central Parc welcomes Emy Soza (B.Acc ’12) as a sales coordinator. She will be organizing presentations to realtors, brokers, and prospects as wells as assisting with all sales.