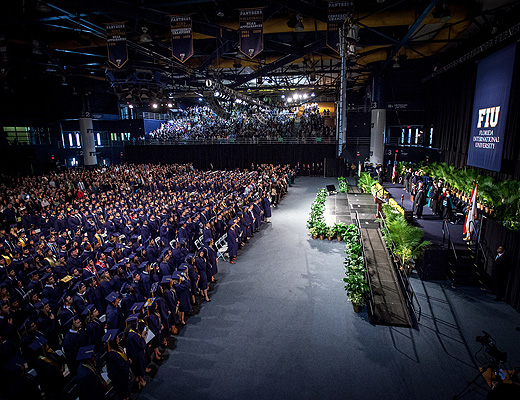 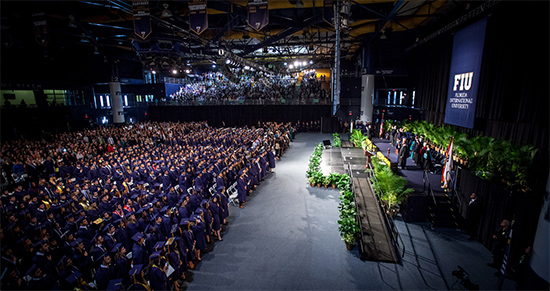 Nearly 1,000 students in FIU’s College of Business were awarded degrees at Commencement ceremonies on December 15, 2015.

President Mark B. Rosenberg welcomed the graduates and their family and friends to two ceremonies at the U.S. Century Bank Arena, located at FIU’s Modesto A. Maidique Campus. Dean David R. Klock presented the diplomas.

With faculty members Donald Roomes and S. Christopher Ellis chosen to lead the Alma Mater and Star Spangled Banner, 595 students from the R. Kirk Landon Undergraduate School of Business were recognized at the morning ceremony.

“You are prepared to not only take a great job, but to create a great job—jobs that add value and add meaning,” President Rosenberg told Landon graduates.

At an evening ceremony the same day, 350 students from the Alvah H. Chapman Jr. Graduate School of Business were honored. The commencement address was given by FIU alumna and Miami-Dade County Commissioner Audrey M. Edmonson, Class of 1994.

Since 2010, FIU has recognized students who exemplify the “Worlds Ahead” philosophy of the university. At the Fall 2014 Commencement, three students from the College of Business received Worlds Ahead recognition:

Maria Berry (MBA ’12, MSHRM ’14), a resident of Panama, earned her master’s degree online at the top of her class, despite a serious illness. She started the year-long program in spring 2013, becoming part of the online program’s second cohort. Midway through the course she was forced to take a medical leave to recuperate from surgery and exhausting follow-up treatments. Berry, 44, remained positive and two years later achieved her goal, although she was not able to be at the commencement ceremony. She is planning for a successful career in management and will apply for the Presidential Management Fellowship.

Giano Currie (BBA ’14) became the first member of his family to come to the U.S. from the Republic of Suriname to study. During his four years at FIU, he has become an inspiration to other students. He joined the American Marketing Association (AMA) at FIU, working with the Miami Marlins to improve the team’s outreach to millennials. Currie became the AMA’s director of digital media and held two officer positions.

A member of the AMA Honors Society, he connected with Costa Farms at an AMA event and became a digital media intern. After graduation, Currie will stay in the U.S. working full-time at Costa Farms.

Gabriel Noboa (BBA ’14) transferred to FIU in 2011 and immediately joined the AMA chapter, serving as vice president and then president. He helped lead the chapter to 16 awards at the International AMA Collegiate Conference and Noboa received the Outstanding Student Marketer of the Year Runner Up award. Besides completing four internships, Noboa launched Alexander Jacobs Group, a consulting firm. He is a founder of Lion Fuse Digital Media, an agency specializing in web development and social media. Noboa is also CMO of another joint venture, smartphone and tablet repair company RepairGeeks. His plans include launching a tech company currently in development and franchising RepairGeeks.

Marie-Michelle Beauchesne (PhD ’14), who earned a doctorate degree, was a graduate student/instructor in the Department of Management and International Business. She has accepted a position as assistant professor at Barry University.

Rene Brito Jr. (BS ’14), a student assistant in the Corporate MBA office, earned his Bachelor of Science in Civil Engineering. He will be an entry-level engineer in the Environmental Engineering/Utilities Division of the URS Corporation.

Rosangela DiCostanzo (BS ’14), a student assistant in the Department of Management and International Business earned a Bachelor of Science degree in Criminal Justice.

Jahath Inyang (MS ’14), a graduate student assistant in IT Support and Web Development in the Department of Management & International Business, received a Master of Science in Telecommunications and Networking degree.

Krystal Saleta (MS ’14), program coordinator at the Hollo School of Real Estate, received a Master of Science in Human Resources Management. She received her BA in Psychology from FIU in 2013.

Romy Vaizaga (MS ‘14), program manager for the International MBA, received a Master of Science in Human Resources Management. She received her BA in Psychology from FIU in the Fall of 2011.