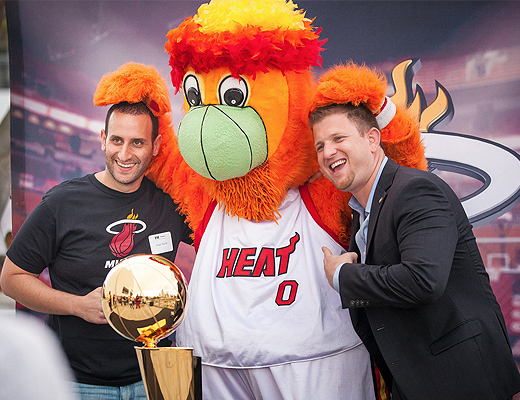 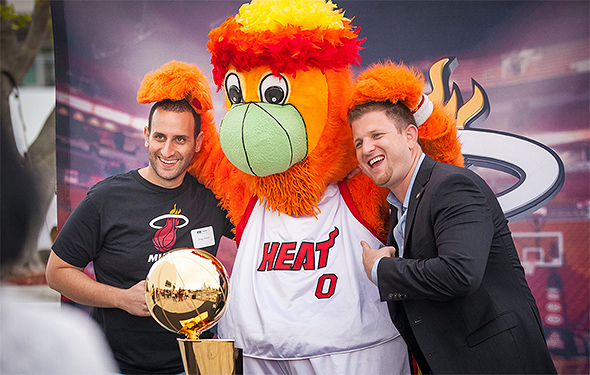 The cell phone cameras were going non-stop at a pre-game event at the American Airlines Arena. People were taking photos of the Miami Heat Dancers; with Burnie, the Miami Heat mascot; and with old acquaintances and new friends.

“People were even taking selfies in the reflection of the Heat’s spectacular 2012 NBA Championship Trophy, which was on display for us,” said Michael Perez (BBA ’12), president-elect of Florida International University’s (FIU) new Marketing Alumni Affinity Council (MAAC), part of the Business Alumni Chapter, which hosted the alumni event on April 13, 2015.

The selfie-takers were among 140 attendees who enjoyed a unique opportunity: networking, games, and hearing a Miami Heat official share her experiences and strategies in marketing the popular team. 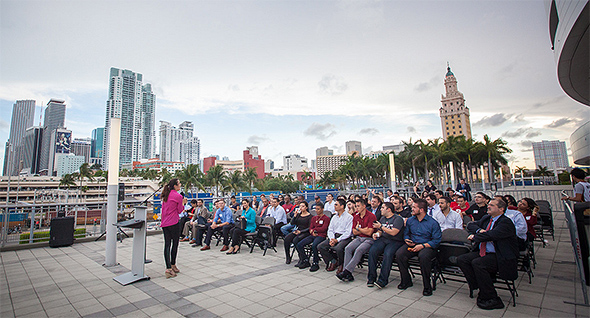 Perez and his team planned the pre-game event, held on the South Plaza of the arena, to also include fun giveaways and a random drawing for seat upgrades for the team’s final game of the season. A raffle to raise funds for the group resulted in lucky attendees getting the chance to shoot hoops on the arena court after the game.

“This Miami Heat event, open to marketing alumni as well as other alum of FIU and friends, was a great success,” Perez said. “We included fun, networking and a unique opportunity to hear from a Heat marketing professional.” Lauren Cochran, director of Interactive Marketing and New Media for the Miami Heat, shared her insights into the formation and monitoring of social media.

“Oh, and yes,” Perez added, “the Heat won their game that night, the closing game of the season, beating Orlando 100 to 93.”

A great event from marketing people? Count on it.

“The very first hour after marketing alums started receiving the email invitation to this event, we started receiving a great response,” said Yanyn San Luis (BBA ’10), assistant director, Alumni Relations. “This was the highest attendance for any Business Alumni Chapter event. But I’m not surprised. Michael Perez and his team are marketing people so you better believe they know how to plan a fabulous event.”

“We asked ourselves, ‘What kind of event would we want to attend?’” Perez said. “Then we just got to work.”