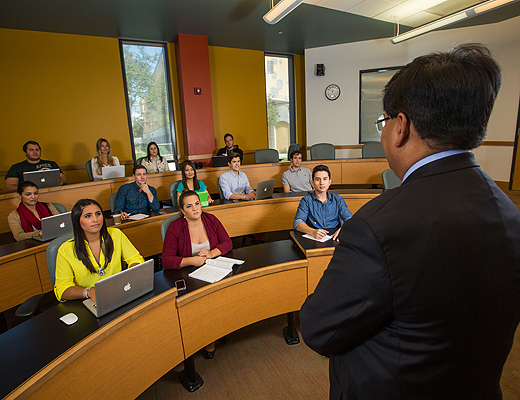 Monica Chiarini Tremblay, chair, and Pouyan Esmaeil Zadeh, research associate, co-authored an article which has been accepted for an upcoming issue of Research in Social and Administrative Pharmacy. The article is entitled “A review of the literature and proposed classification on e-prescribing: Functions, assimilation stages, benefits, concerns, and risks.”

Also, Zadeh has co-authored another article, “Adoption of clinical decision support systems in a developing country: antecedents and outcomes of physician’s threat to perceived professional autonomy,” which has been accepted for publication in the International Journal of Medical Informatics.

An article by Jerry Haar, professor, entitled “Outsourcing Services to Cuba? A Win-Win for the U.S. and Cuba” appeared in Latin Trade on April 10, 2015.

Also, a paper co-authored by Haar and José Galli Geilalate, a doctoral student, entitled “Export behavior and board independence in Colombian family firms: A virtuous cycle” has been selected for publication in the special issue of the Journal of Business Research focusing on the internationalization of Latin American firms.

Samantha C. Paustian-Underdahl, assistant professor, was one of only 32 faculty members to be named as an FIU Top scholar for 2015. She received her award on April 24, 2015, during an evening reception hosted at the Ronald Reagan Presidential House by President Mark B. Rosenberg and Provost Kenneth Furton. The annual award celebrates faculty members’ accomplishments in research as well as dedication to excellence in helping achieve FIU’s scholarly mission.

Also, Paustian-Underdahl co-authored a paper accepted for the International Journal of Human Resource Management. The article is titled “Revisiting the Beauty is Beastly Effect: New directions and tests of the effects of attractiveness, sex, and job characteristics on selection decisions.”

Jonathan Hasford, assistant professor, is co-author of “More Than a Feeling: Emotional Contagion Effects in Persuasive Communication,” which has been accepted for publication in the Journal of Marketing.

Suzanne Hollander, instructor, was featured in a study examining U.S. states with the best and worst taxpayer ROI on WalletHub.com. Eli Beracha (right), assistant professor, was named as the recipient of the American Real Estate Society’s (ARES) Kinnard Young Scholar Award which recognizes an outstanding scholar in an earlier stage of his or she academic career. Beracha received his award at the ARES meeting in Ft. Myers, Florida, on April 16, 2015. He is congratulated by ARES President Mike Seiler (right) and by Len Lin (left) who won the award in 2013. Lin becomes an FIU faculty member this coming fall. William G. Hardin III, director, was the program chair for the ARES meeting which had nearly 80 paper sessions and almost 500 attendees.