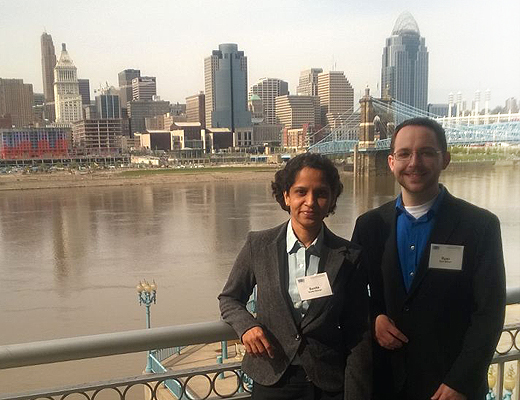 What should be done when hospital employees post messages on social media that violate the rules of HIPAA, the federal Health Insurance Portability and Accountability Act? That was the test for graduate students in the Society for Human Resource Management (SHRM) case competition, part of the SHRM Case Competition and Career Summit on April 25, 2015 in Covington, Kentucky.

“The case issue was, how could this hypothetical hospital prevent that situation from happening again?” said Ryan Mahan, who teamed up with Sunita George to enter the case competition. Both are students in the Master of Science in Human Resource Management program in the College of Business at Florida International University (FIU).

“Our solution involved recommending that the hospital now begin a social media policy developed with grass roots input from a variety of employees,” Mahan said. “We also recommended that the facility begin its own internal social media site.”

Mahan and George had four days in March to prepare their written recommendations and then both traveled to the competition to make an oral presentation of their work. Twenty-eight teams presented in each of three divisions.

A team of undergraduate students from FIU – Yvrose Meirzier and Abeera Parwani – also prepared for the competition at the conference, which also included speakers, one-on-one sessions with HR professionals and networking opportunities.

Uncooperative airlines threw a wrench into the plans of many of the FIU team members. At the last minute, flights were cancelled for both teams and for Galen Kroeck, chair of the Department of Management & International Business, who was going to accompany the students.

Only Mahan and George were rerouted in time to make the competition. George arrived only 10 minutes before the presentation to judges.

“We didn’t qualify to go the final round but it was a worthwhile experience to work on the case, and to participate in all the Career Summit had to offer,” Mahan said.

“Travel hassles certainly added more challenge to competing,” he added. “But still I’m glad I did it. This was my first case competition and it had real value for me.”