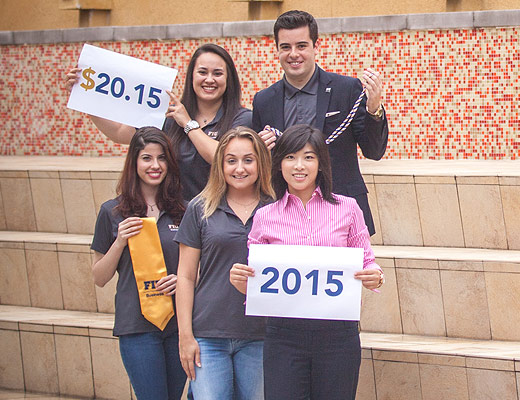 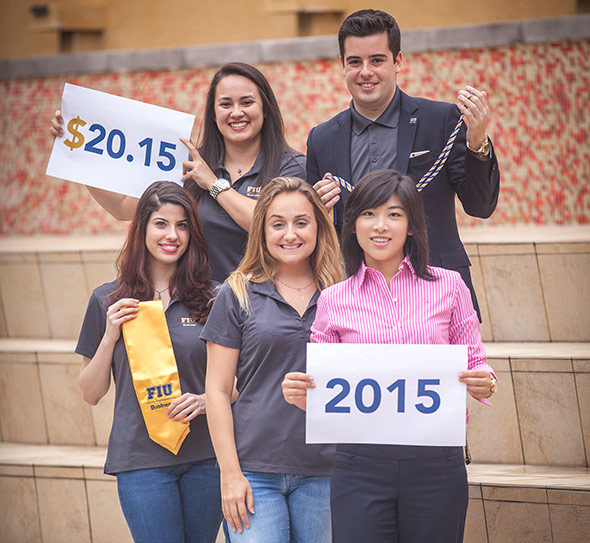 At 2015 commencement ceremonies at Florida International University (FIU), for the first time, many College of Business students are wearing a special cord or stole with their graduation gown to show their support of a new way of giving back: the class gift.

“This year marks the 50th anniversary of the university and the College of Business has initiated an effort for each class to make a gift,” said Danielle van der Eijk, chair of the newly formed Business Student Philanthropy Council. “Business students have stepped up, becoming part of a culture of giving.”

For a tax-deductible contribution of $20.15, members of the Class of 2015 receive a blue and gold cord to show their participation, while Panthers who donate $40.00 receive an FIU Business stole.

The Class of 2015’s gift will go to the FIU Student Enhancement Fund, which helps pay for out-of-the-classroom experiences such as case competitions and professional development opportunities, scholarships and mentoring programs.

“The Business Student Philanthropy Council was organized in the fall semester of 2014, and the class gift opportunity was offered to members of the Class of 2015,” said San Luis. “Over 100 graduates at the spring commencement participated, raising $2,367 – very impressive for a new idea. It’s amazing how individual gifts add up quickly.”

San Luis said three of the founding members of the council have graduated and new members have joined.

“We are proud to have established a structure of giving,” said van der Eijk. “Seniors are telling us how they’ve benefited from the Student Enhancement Fund and are happy to participate. Some have even been able to give more.”

“As this idea becomes more established in name and structure, we hope to grow exponentially,” she added.