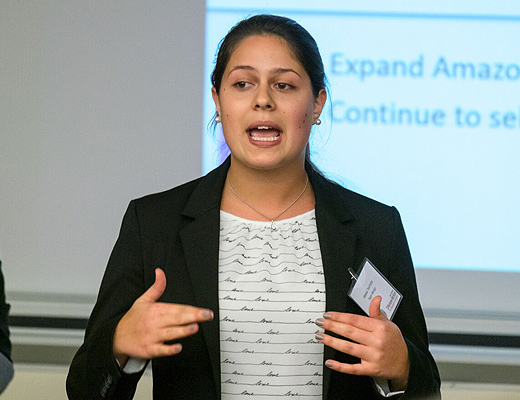 Business problems don’t come any bigger than this: create a plan to expand Amazon’s global reach, with specific strategies to expand products and services in advanced and emerging markets.

Teams had 24 hours to form a solution and write a 15-minute Powerpoint program, which they then presented twice to different panels of eight judges. Presentations were followed by a question and answer session. Faculty advisors can have no contact with students after the case is distributed.

The FIU team — named Team Mango by its members – consisted of Fayez Abboud and Manuella Monteiro Y Mota, both juniors from Brazil; Aymara Cristina Salazar, a senior from Venezuela; and Alessia Tacchella, a senior from Argentina.

Monteiro described the experience as “amazing” and “inspiring” as it gave her skills she will use in her career.

“I learned so much in only two days, not only about international business, but also how to efficiently work in a team and do extensive research on a very specific topic,” she said. “We studied each area and provided an analysis of strengths, weakness and opportunities for Amazon in each country, noting which were the most profitable for Amazon.

“We also provided an aggressive approach for global expansion to some emerging countries and some developed countries that showed great potential for e-commerce,” Monteiro said.

“Participating in this competition makes me a stronger candidate and a better student in the world of business,” said Tacchella, who also competed in 2014. “Case competitions can add value to a resume plus they open up your mind as you create strategies and solutions for real companies.”

Judges and team advisor have high praise for FIU’s team.

Although FIU’s team did not win the competition, the judges were enthusiastic in their praise for the team’s research and results.

“Team Mango did us proud,” said team advisor David Wernick, senior lecturer and R. Kirk Landon Fellow in Student Engagement, MIB. “They put forth a compelling strategy for Amazon and delivered it with poise and confidence. It was a definite learning experience for the students as it simulated a real life, high pressure consulting project requiring research, analysis, teamwork and effective communication.”

“Professor Wernick was very helpful, first by helping us prep before the competition,” Monteiro said. “He organized a mock debate at FIU judged by MIB faculty members Donald Roomes and Sungu Amargan. Then, after the competition in Boston, he showed us what we could improve on and how to be stronger — which will definitely help in preparing for next year’s competition.”