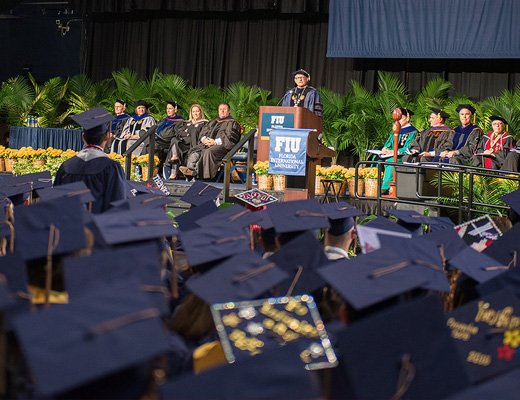 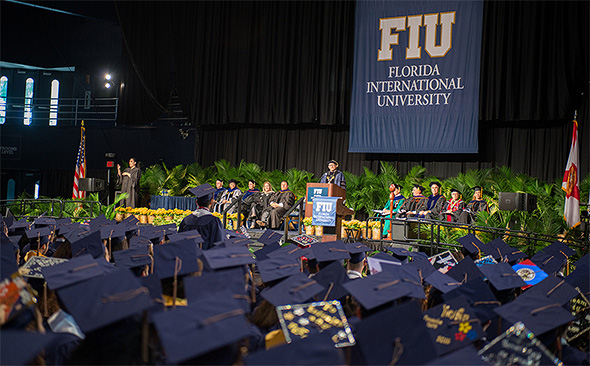 Years of study, determination and beating difficult odds placed four College of Business students on the road to success. They received prestigious recognition as Worlds Ahead graduates at the Fall 2015 graduation ceremonies on December 14.

Established in 2010, FIU’s “Worlds Ahead” recognition singles out individuals with strong leadership qualities, a desire to change lives and a record of academic achievement.

The Worlds Ahead graduates were introduced at Commencement ceremonies by President Mark B. Rosenberg. “These students have shown they are Worlds Ahead by excelling in and outside the classroom,” he said. “They have overcome challenges, demonstrated leadership, conducted groundbreaking research and academic work. They have changed lives.”

An episode of double vision during Adeel Sobani’s freshman year at FIU led to a diagnosis of chordoma, a rare brain tumor. After brain surgery, radiation treatment and warnings that it would impair his ability to learn, he was determined to prove skeptics wrong.

Adeel, who graduated with a Bachelors in Accounting, took five classes every semester during his time at FIU and remained on the Dean’s List every semester. He will now complete his third internship (audit) with PwC in its Fort Lauderdale/ Miami market, and start his Master of Accounting at FIU in August 2016.

Challenges in their home countries and immigration impacted three 2015 Worlds Ahead graduates, and it quickly became one of their drivers to excel academically.

Poverty plagued the early life of Ghana native Anya Schmidt. At 8 years old she began working at her sister’s store, to help the family following her father’s death, and learned that hard work and education would help her overcome life’s greatest challenges.

At 12 years old, when her grandmother gave her an opportunity to study in Germany, Schmidt became the only black girl in her community and fought back against prejudice with a determined attitude. Committed to succeed, she learned the language and excelled in school.

Anya’s next stop: a prestigious job on Wall Street. After successfully completing an internship program within the Corporate and Investment Bank at J.P. Morgan this summer, she will be joining the firm full-time in New York. She credited her faith and family with guiding her journey.

Daniella Bernasconi moved to Miami from her native Peru when she was 13. Adapting to a new country, with a different culture and language, wasn’t easy. She recalls having to work harder than her classmates to succeed, get good grades and get into college. Business has always been on Daniella’s mind, making her determined to follow in her father’s footsteps as an entrepreneur.

She is now the first in her family to graduate from a U.S. university, receiving a Bachelor in marketing and international business. This summer, Daniella began a Market Development internship at MasterCard’s Latin America and Caribbean headquarters and is hoping to remain full-time at MasterCard upon graduation.

Zsofia Labady was recruited to the FIU women’s basketball team in the summer of 2011 from her native Hungary, where she won national accolades for scholarship and athletics. While her parents remained in Hungary, FIU provided the global community she was looking for. Zsofia combined the rigors of varsity sports with a double major in accounting and international business, graduating a semester early, in December 2014.

A disciplined approach enabled her to keep up with coursework and participate in group projects remotely. Zsofia finished out her FIU hoops career with the 2015 season as she began the Master of Accounting program. Zsofia will now join PwC’s assurance practice in Washington, DC.

The College of Business’ Worlds Ahead graduates agree that the education they’ve received at FIU will provide a considerable advantage in their professional development.

“They pursued their passions. They exceeded expectations,” said Rosenberg. “They took their engagement in this world to a new level.”