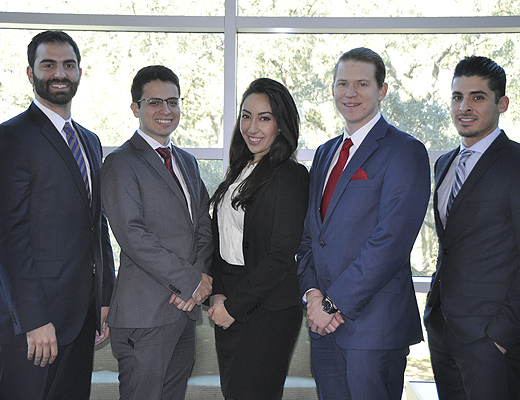 On February 13, 2016, five FIU students took on the Florida Intercollegiate Case Competition, a 24-hour test of strategy, stamina and presentation skills sponsored by the University of South Florida in Tampa.

After three months of almost constant preparation, and with less than two hours’ sleep that night, FIU’s team, the Mercury Group, walked into their presentation fueled by adrenaline. They delivered a point-by-point business improvement plan to top executives of a furniture industry leader.

There was no need to wait for the judges’ verdict to understand the value of what they had done.

“When we were finished,” said team captain Cynthia Gonzalez, an IMBA student, “we knew we had performed to our ultimate limit. We knew we were successful.”

“At that moment,” said Marcus Nielsen, a JD-IMBA student, “I already knew that I had just had one of the most beneficial experiences of my academic life.”

To earn that moment, Mercury Group took first place in the 2015-16 Chapman Cup, a case competition for graduate business students. Former Chapman admissions director Ellie Browner had started coordinating MBA teams for the case competition when the Tampa competition began in 2003. “FIU has fielded a team for 13 consecutive years, and two of these teams emerged as champions,” Browner said.

Walfried Lassar, associate dean for the Chapman Graduate School of Business, expanded FIU’s competition to all graduate business programs as a way to give more FIU students practice in analyzing and presenting case studies.

“To succeed in the professional world, you must be able to create a rationale for the course of action you want to pursue, and present the evidence to top executives,” he said. “Case studies train you to do this.”

In a close decision, Mercury Group emerged victorious. In addition to Gonzalez and Nielsen, team members were Bryan Barrientos and Roberto Behar, JD-IMBA students, and Alejandro De Lemos of the IMBA program. 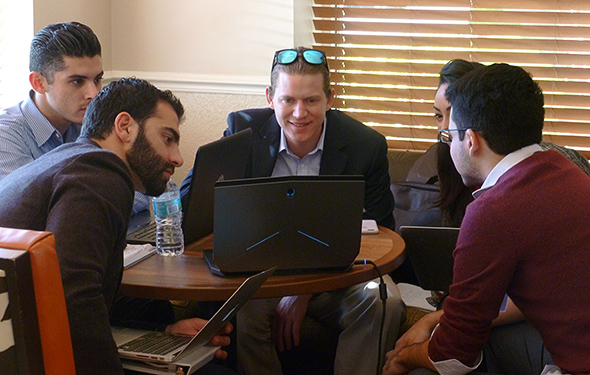 Stepping up, around the clock.

For the Mercury team, the learning curve for the Tampa challenge was particularly steep. They had started Chapman’s full-time International MBA program in Fall last year, and only one member had an undergraduate business background, in finance. Yet team members quickly developed strong chemistry, and by competition time, had cemented a solid game plan.

As their MBA classes advanced, so did their case skills.  “We saw the connections between our subjects that we didn’t see in class,” said Barrientos.  “The case process put our knowledge into practice.”

They faced moments when studying for tests became secondary to joining the team for yet another 12-hour round of case preparation.  “Every Monday, we locked ourselves in a room and we didn’t leave until we finished the case,” Gonzalez said. “My family wanted to know if I was ever coming home.” Trepidation turned to confidence as subjects students had once feared – finance for a few, public speaking for others – started to make sense.

In weekly sessions, Faculty Director Barnett brought a new approach to help guide their thinking, an analysis that enabled them to see and understand financial issues in the context of resolving cases. And in the final weeks before the competition, Patrice Bailey, a coach known for her game-changing advice on business presentations, delivered intensive, personalized instruction that stepped up the team’s game.

“Patrice broke us apart,” Gonzalez said. “She was, ‘Change this, do that, go over it again and again.’ She taught us how to focus on the moment, to understand what’s on the slide behind you and how it relates to the message you’re trying to get across.”

Those weeks of learning how to view a case, and hours of intense practice, gave team members high confidence when it was time to go to Tampa.

On the morning of the competition, the case company was revealed: Ashley HomeStores, Ltd., the largest company in its industry.  At 7 a.m., teams got on a bus. They toured a company facility designed to process e-commerce orders and learned about Ashley’s line. They also received the challenge: design a plan to increase sales from $3 billion to $10 billion through e-commerce, targeting the millennial audience.

Focusing on a long-term plan, Mercury Group initiated a Facebook survey on millennial furniture buying, collecting 180 responses. They proposed building an app that meshed with a customer’s store visits and a virtual reality site capable of placing a piece of virtual furniture inside a customer’s home. Through the afternoon, the night and the early morning, they built the marketing, financial and operations data to support their recommendations.  “You get to a point that sleep doesn’t matter,” said Behar. “You’re shooting in the dark and you don’t always know what your goal is, but you don’t want to disappoint.”

Mercury Group was the first to present. Their work came together in a smooth, engaging presentation that intrigued the judges, who asked questions and challenged their knowledge. “They did really, really well,” said Browner, the veteran case advisor.

After all teams were done, the judges revealed that two teams stood above the others. First came the disappointment: the University of Florida was selected as the winner for a recommendation that solved the company’s most immediate problem.

Then came the redemption: The FIU team’s strong, innovative presentation had made the choice difficult. Judges named Mercury as the second place finisher, awarding them a prize of $1,000.  “It was unprecedented to award a second-place prize,” said faculty member Del Pezzo, who will take on the role of case competition faculty advisor next year.  “Judges appreciated their strong presentation, and the fact that they went out and did surveys, which no one else did.”

A post-competition feedback session offered the opportunity for one-on-one exchanges with Ashley executives. Gonzalez, a former retail manager and buyer for the Biltmore Resort in Coral Gables, jumped on the opportunity to connect with executives and followed up with emails. Two weeks later, she was invited to Ashley’s offices to interview for a position for the company. The members of Mercury look forward to mentoring future Chapman Cup participants. With the competition behind them, they continue to process its value.

“This is the richest experience we’ve had the opportunity to take part in, the most in-depth, and one that is carried over into a classroom setting,” said Gonzalez. “Classmates see what we can do in case work now, and they want to gain the same skills.”

Behar added: “It’s not only rewarding in the academic space. It’s so personally rewarding, to overcome a challenge like that.”