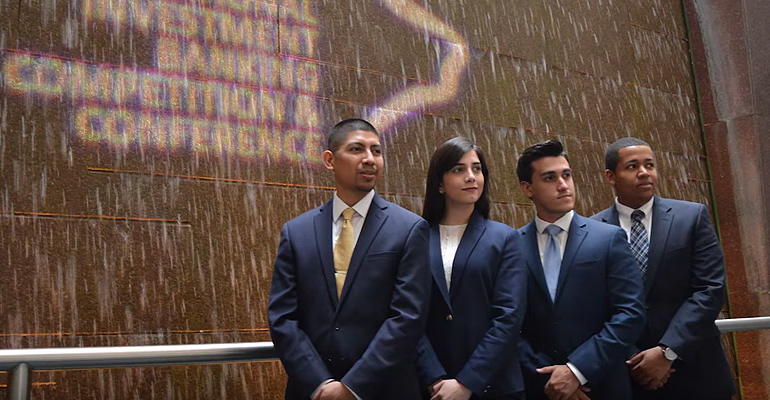 At first glance, spending seven hours locked in a hotel room doesn’t seem like much of an honor. But that’s what it was for four undergraduate Florida International University College of Business students, all members of the Phoenician Investment Fund (PIF). The quartet was chosen as one of 24 university teams to participate in the 2016 National Investment Banking Competition, held this spring.

“We went through the case, submitted our analysis and we got the great news on January first – we passed to the final round – we’re going to Canada!” said team member Maria Chahin, who is working on her BBA in finance and international business.

Being named to the semi-finals and selected out of more than 330 teams was a validation for PIF, which has about 120 members. The annual case competition, which has graduate and undergraduate tracks, took place in Vancouver. Rounding out the team were Carlos Consuegra, Jacob Grohoski and Daniel Riley.

NIBC bases its selections on a team’s application. However, explained Consuegra, who was the team leader, the organization sent guidelines and preliminary information upon which to build each entry. Phoenician’s case centered on AT&T acquiring a cable and satellite firm. The competition’s second round asked the team to delve more deeply into same supposed transaction.

On your own with data.

On the morning of the second round, they were ushered into a Vancouver hotel room. Cell phones were confiscated and the Internet was blocked. Breakfast and lunch were delivered. The total blackout dramatically increased the level of difficulty. “If you didn’t know something, you couldn’t find it,” Chahin said. They had to emerge with a presentation based on a transaction, complete with financials and forward-looking contingencies.

“We pitched our advice and we had eight minutes to give an in-depth transaction,” Chahin said. The presentation included five minutes of questions, some quite technical. “There was an exciting feeling of being in that moment.”

In the end, Phoenician Investment wasn’t one of the two teams picked for the finals. But that did little to dampen their enthusiasm. “We had opportunities to network with top representatives of the visiting firms,” Chahin said.

And it was a glimpse of the future. “Everything you do in the competition is what you would do working as an investment banking analyst,” said Consuegra, who, like Chahin, is working on his BBA with a focus on finance and international business.

The Phoenician Investment Fund was started several years ago. Its name evokes the ancient trading nation that plied the Mediterranean and Aegean centuries before Greece reached its glory. The FIU group’s trades are now made without actual money, but students are working on creating a funded option – another way to prepare for finance and investment jobs.

Getting a taste of the real world is also the best part of the NIBC competition, noted Consuegra. “The semi-finals are structured as if it was a regular day on the job,” he said. An added benefit is that the competition is the kind of experience job interviewers like to hear about, he said. “This is 100 percent what you are going to do on a day-to-day basis.” 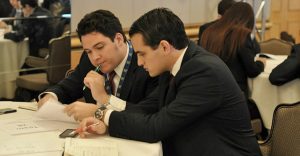 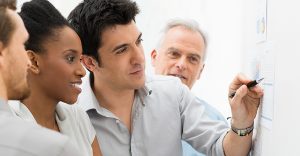