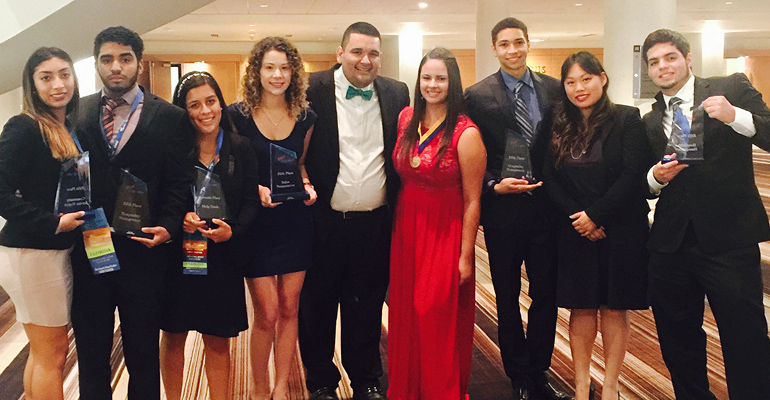 The announcement was made at the National Leadership Conference for PBL, the collegiate division of Future Business Leaders of America (FBLA), which was held June 24-27, 2016, at the Atlanta (Georgia) Marriott Marquis. Amaya also serves as the FIU chapter president and as the 2016-17 Florida State president.

Applause filled the ballroom at the awards ceremony when Amaya’s name was announced for the highest honor. Members from chapters throughout Florida, including the ten members from FIU, were said to have cheered the loudest as one of their own was called to the stage.

“It was an incredible moment and I am very grateful for the chance to lead this talented group of students,” says Amaya, who is travelling at the end of July for leadership training at the organization’s headquarters in Reston, Virginia. “Activities and opportunities within FBLA-PBL give members the chance to have a portfolio of documented accomplishments before they enter the job market.”

While other FIU students have held national office for FBLA-PBL, Amaya is the first to earn the title of president. His year ahead includes leading the national organization and representing its members in meetings including those with congressional leaders in Washington, D.C. FBLA-PBL, one of the student organizations in FIU’s College of Business, helps over 230,000 members prepare for careers in business and business-related fields.

“I am over the moon at the honor Albert has brought to FIU’s College of Business and to all of Florida,” said chapter advisor Yanyn San Luis (BA ’10), assistant director of alumni relations in FIU’s Office of Advancement. “I have known Albert since his high school days in FBLA. He has continually developed his leadership skills through this organization, bringing him to the moment he was ready for the highest leadership position.”

Also named to national office was Elizabeth Alvarez, who will serve for a second year as National Parliamentarian. Her appointment is based on achieving the highest test score on the parliamentary procedure written exam.

More honors at the national conference.

FIU’s chapter, named as the Florida Chapter of the Year last March, once again received the FBLA-PBL Gold Seal Chapter Award of Merit award at the national conference.

Chapter members earned distinction in competitive events at the conference:

“The group of leaders at FBLA-PBL at FIU has done amazing work in taking this chapter to the next level,” said San Luis. “It’s an exciting time to be a member.”