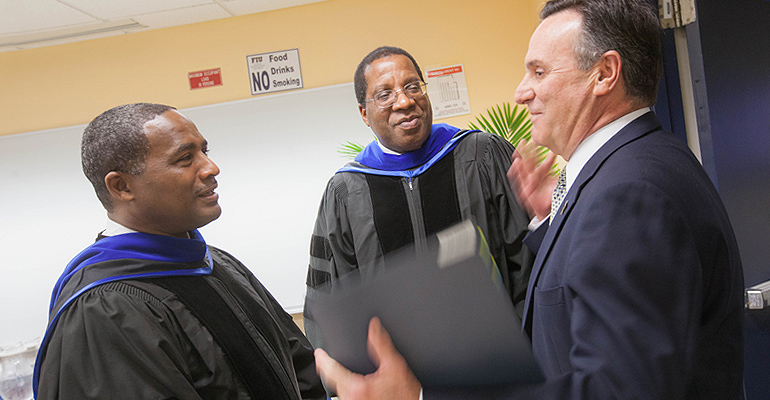 There isn’t much that College of Business professors Louis Melbourne and Donald Roomes haven’t shared. They each have two curriculums, the one they taught and the one they took; and two sets of deadlines, the ones they assigned and those assigned to them.

The professors met in 1988 during the first semester of studying for their MBAs at FIU. Roomes married Melbourne’s sister, Sandra, two years later. Their children, five combined, have grown up together; and there have been many joint family vacations over the last 26 years.

Perhaps the most interesting piece of common ground: the challenges and mutual support they shared while studying for their doctorates at the University of Maryland University College. In May, they received Doctor of Management degrees…together.

“Encouraging each other was instrumental,” said Louis Melbourne (MBA ’92), instructor in the Department of Management and International Business. “An advisor told us that we were so cohesive, so driven, that he never had to push us.”

The Maryland program was the right fit for Melbourne and Roomes because it offered the flexibility for both to keep their teaching schedules at FIU, while allowing them to have in-person contact with their professors and fellow students. Their coursework targets scholar practitioners, working professionals and executives, bridging the gap between research and hands-on practice.

“The goal is to make the knowledge we learned usable,” said Roomes (MBA ’90), assistant chair in the Department of Management and International Business at FIU and a College of Business alumnus who joined the FIU faculty in 1994. “How can I apply that knowledge when I go to work tomorrow?”

Moving forward with tenacity and confidence.

“In this program, the traditional structure of the dissertation preparation is spread over the length of the program,” said Melbourne, who spent almost 30 years in the property and casualty insurance industry before joining FIU full time in 2010. “The coursework allows you to keep everything fresh.”

Over the course of the three-year program, the professors admit, there were challenges, ups-and-downs, and even some disappointments. Their combined strength provided the impetus necessary for success.

Roomes, who before entering academia was an exploration geologist with Petroleum Corporation of Jamaica, added: “It’s wasn’t easy, but we were there for each other.”

Making it all about family.

Melbourne and Roomes have shared important milestones well beyond the FIU campus and the long hours studying for their Doctor of Management degrees. Among them are birthdays, weddings, family reunions, their children’s graduations, and their annual Jamaican Independence Day celebration.

With a laugh, Roomes recalled that the day he proposed to Sandra, her father — joined by Melbourne and another brother — offered a warning: “If you marry her, there are no exchanges, no returns. Never forget that.”

Melbourne added: “It was like a mafia family meeting.”

Both describe their family bond as being more like brothers. At one point, Melbourne considered moving outside Miami, but discarded the idea “because it would have broken the bond between our kids.”

Shared vacations have delivered much fun and a lot of laughter. One year, it was a rented cabin in Pigeon Forge, Tennessee – shared by 20 family members. Another time it was a Caribbean cruise.

Adding music to the mix.

In addition to working together, graduating together and sharing a family bond, music also binds Roomes and Melbourne – they sing together.

Roomes first took the stage at a commencement for the Executive MBA program in Jamaica when he was faculty director there, singing the Star Spangled Banner with Professor S. Christopher Ellis. They later moved on to perform at FIU’s College of Business commencement ceremonies. Melbourne, who sang bass at a church quartet, joined them in 2009.

And so the trio that today performs the Alma Mater and Star Spangled Banner at College of Business graduations was formed.