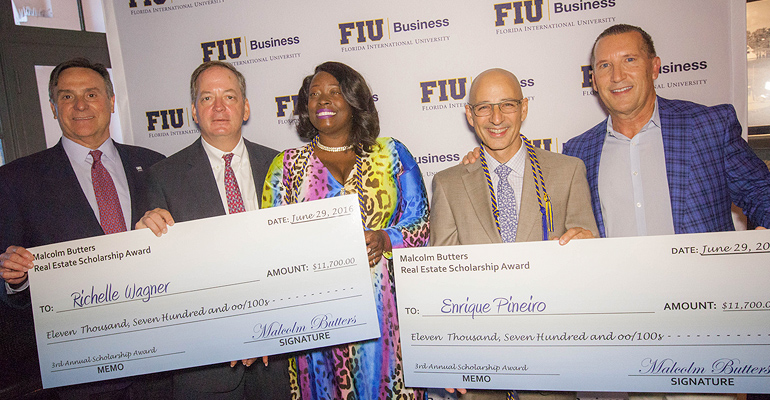 Completing the demanding Master of Science in International Real Estate program at the Hollo School of Real Estate is a true achievement.

Two brand-new graduates of the Florida International University (FIU) College of Business program received an additional reward for their hard work: checks for $11,700 as winners of the Malcolm Butters Real Estate Scholarship Award. The funds are earmarked to help defray student debt.

“It’s great to see the joy in their faces,” said Butters, co-founder of Butters Construction and Development, who earned a master’s degree from the school in 1984. “To me, FIU is a special place.”

The MSIRE graduation dinner and award presentation took place June 29 at Morton’s The Steakhouse in Coral Gables. It was packed with graduates, guests and faculty members. The awards, given for outstanding academic achievement, commitment and leadership, were announced and presented by Butters himself.

“Oh my gosh! Oh my gosh!” were the astonished words of Richelle Wagner, who began her real estate career 15 years ago in the residential sector. The Atlanta resident was a fully online student.

“You don’t know how much this means to me,” she said, after thanking Butters, her professors, and School of Real Estate Director William G. Hardin III. “For anybody who has been put in a box and told ‘you can’t do it,’ — the only thing it takes is that you believe in yourself.”

Wagner, a Louisiana native, put her skills to good use after Hurricane Katrina, helping families find new housing and restart their lives. While transitioning to the commercial sector she realized further education was key. “This program has changed my life,” she said. “I’m not the same person I was when I started.”

Enrique Pineiro, the other winner, is a returning Panther, having earned his BBA in 2003. Now director, property management and leasing at the Allen Morris Company, he’s long been an industry leader and serves in professional and community organizations, including Miami-Dade County’s Affordable Housing Advisory Board. He is also on the FIU Alumni Association board of directors.

“I’m very humble and grateful,” Pineiro said. “This program has meant a lot to me; it has invigorated me in a new way.” Pineiro thanked his professors and fellow students. “I thank all my cohort, it’s been wonderful having you in class.” 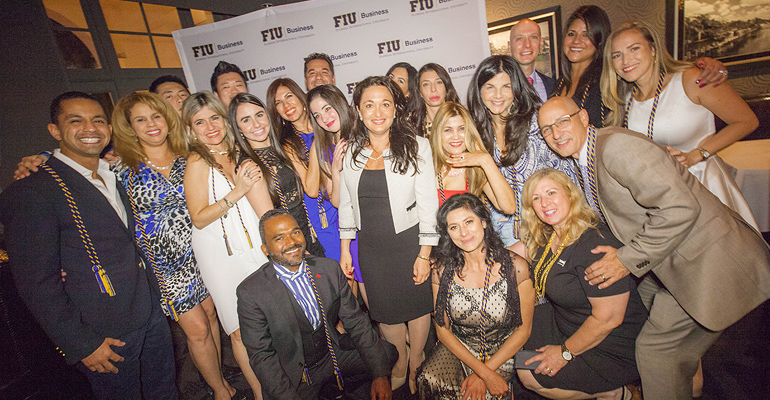 Giving to those in need.

Butters shared how FIU helped him achieve success, and why he is committed to helping others move forward with a lightened debt load.

“The students from FIU are usually local, and take out student loans,” he said. His award “is a way to give back to the students.”

Wagner and Pineiro weren’t the only winners. Assistant Professor Eli Beracha was given the Best Faculty award by both the Downtown on Brickell and online student groups; Assistant Professor Julia Freybote won the Best Course award for her Special Topics in Real Estate class from the Brickell students; the online group gave the same award to school director Hardin for his Advanced Investments class.

The class of ‘16 has been particularly harmonious, noted Hardin. “It’s an experienced group, they bring a lot to the table,” he said. He noted that fully online students – such as award-winner Wagner – have been full participants in the program, which demands a high degree of teamwork.

“I see a lot of smiling faces,” Acting Dean Jose Aldrich said to the diners. “Thank you for being a part of FIU,” he added, urging them to keep in touch with the university and their fellow grads. “It’s not just what you learn, it’s who you meet.”