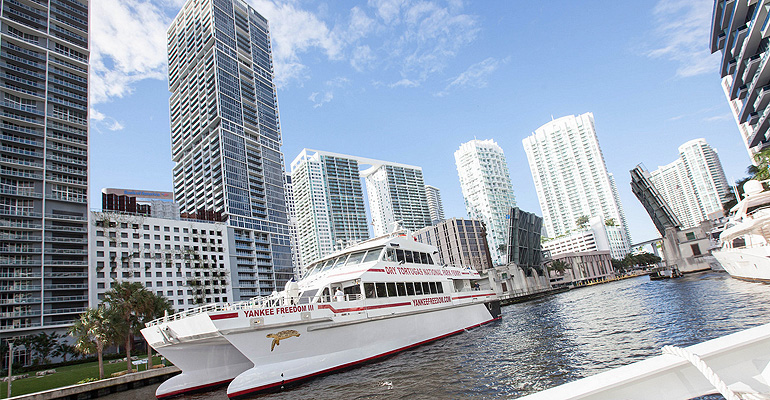 An urban waterway that stood underappreciated for years, the Miami River now overflows with billion dollar properties and development, ranging from luxury condos and hotels to innovative retail spaces and trendy restaurants.

On November 4, 2016, 150 students and alumni from FIU’s Hollo School of Real Estate had an insider’s look at these developments during the sixth annual Miami River Real Estate Urban Property Development Tour. Developers, zoning officials, lenders and industry experts led the conversation aboard the Island Queen, which became a floating classroom for the day.

“We immerse our students in real estate and connect them to industry leaders, so we invite students and leaders to join us on the boat as we cruise through Miami’s most dynamic real estate market and share the development stories of the city,” said Suzanne Hollander, an attorney and real estate broker who teaches at the College of Business and led the boat tour. “It goes beyond book-learning.”

Hollander noted that this year’s tour was “perfectly timed,” occurring one day after the opening of Swire Properties’ $1.05 billion Brickell City Centre, a 4.9 million square-foot luxury shopping center that covers three city blocks and is visible from the river. She welcomed Edward Owen, leasing director at Swire, who spoke about the project, as well as Brickell Key, Swire’s first Miami investment developed in the 1970s, also on the Miami River. 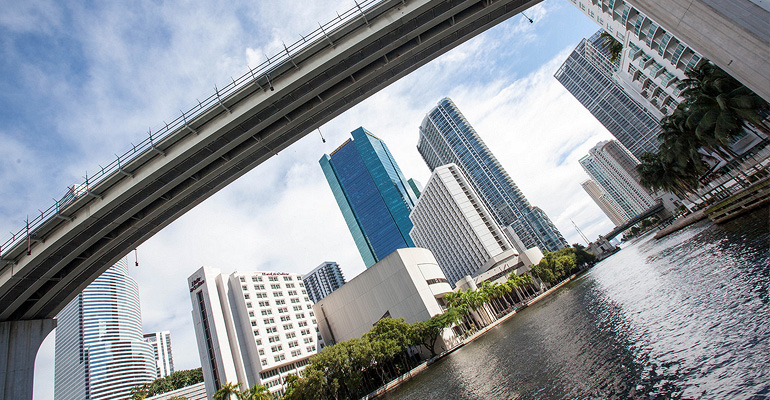 “The Miami River is the birthplace of Miami and now home to residential housing and public spaces,” said Brett Bilbeau, managing director of the Miami River Commission.

The Miami River runs 5.5 miles from Miami International Airport to Biscayne Bay. Boatyards, marinas, shipping terminals and a regular stream of freighters co-exist alongside fisheries, restaurants, condos and a handful of marine supply shops. Development and population numbers in the area have exploded, driven by a demand for urban living and an influx of young, upwardly mobile professionals. The Miami Downtown Development Authority projects the area will have 92,000 residents by 2019.

“Downtown Miami and housing along the river is home to a young demographic of 25-44 year olds,” said Alyce Robertson, executive director of the Miami Downtown Development Authority. “Which is exactly what we want, a young dynamic community.”

Since 2000, more than 7,500 residential units have been built along the Miami River’s shores, with another 3,280 units and 11 single-family homes approved in 2015, according to the Miami River Commission. 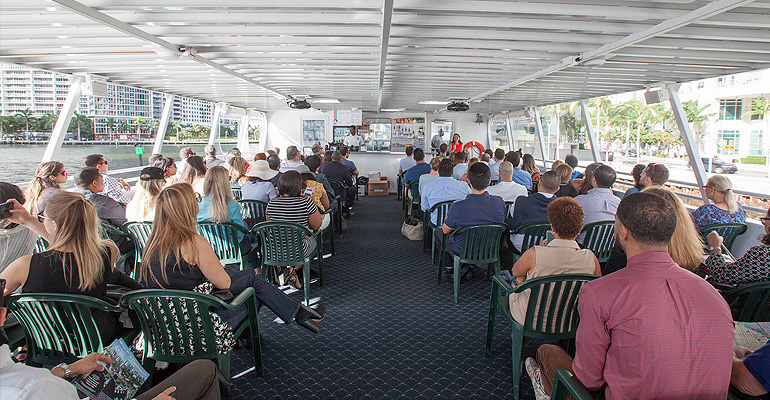 “It’s great to see the river so alive,” said William Hardin III, director of the Hollo School of Real Estate. “We love getting the chance to come out here every year to see what’s new.”

Participants also cruised by a vacant lot of approximately 1 acre purchased by Argentina’s Coto family for nearly $125 million, setting the record high price paid for vacant land in Florida. Last week it was announced that this lot will be home to the 66-story Aston Martin Residences. Construction is expected to begin in summer 2017.

“The Miami River has suffered from neglect and pollution for many years and the Miami River Commission’s goal is to promote awareness and urge the community to forge the political will to save the river,” said Hernandez. “With a solid foundation in real estate fundamentals, students can contribute to solving these challenges we face as a city.”

“It’s an exciting time to be in real estate and I encourage students to continue in their real estate studies and think about how they can impact our beloved Miami and leave their mark on the city,” added Hernandez, who was president of the Real Estate Student Association (RESA) during her time at FIU.