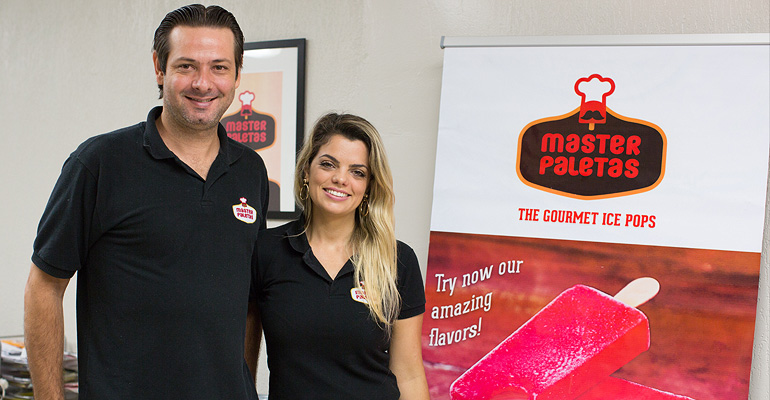 The food handlers donned on scarves over their hair, face masks over their mouths and noses, white coats over their clothing and gloves to cover their hands. Carefully, each poured a creamy mixture into a Popsicle mold that would be iced and later filled inside with a liquid complementary delicious flavor.

One recipe called for vanilla stuffed with Nutella, another for coconut with dulce de leche, yet another for strawberry with condensed milk. Sometimes, the recipe called for no filling at all or the creaminess of chocolate, cookies ‘n cream or berry yogurt. A total of 14 flavors, with more currently in taste-testing, came to fruition.

This is just a glimpse of the iced desserts that are created at the Northwest Miami-Dade factory of Master Paletas, manufacturers of handmade gourmet ice pops. Only natural premium ingredients are used. The company is doing so well that executives are looking for a larger warehouse so it can triple its production. From the very inception of the business, Michele and Francisco Garcia sought the help of the Small Business Development Center at FIU.

The expert consultants at the Florida SBDC at FIU helped the Garcias with market research, development of a business plan, finding a warehouse for the factory, permitting and licensing. SBDC at FIU also guided the Garcias as they negotiated with investors for capital funding. Because the Garcias are immigrants from Brazil, they also had to obtain work permits from the federal government.

“At first, we thought the SBDC only worked with citizens, but we learned it was so much more,” Michele Garcia said. “They helped us in so many aspects. We just had a dream and a project, and we wanted to conquer the world.”

The Garcias wanted to bring the fruity, creamy desserts that are so popular in Brazil to Miami, where the couple had previously met and lived. Originally, they said, they planned to import and sell them in Miami. But they soon learned it made more financial sense to manufacture locally and sell to company owned paleterias.

The company now has 20 employees and sells the frozen desserts in malls in Miami, Sunrise and Orlando as well as to distributors, restaurants and gas stations. Licensing is in the works for a healthy line of flavors that includes whey protein.

“We’ll always need help from consultants in different aspects, like marketing and commercial planning,” she said. “So it will always be helpful to work with SBDC.” word

Garcia said an acquaintance referred them to the Florida SBDC at FIU, and she would recommend the center to other business owners: “The advice I would give is to do your research, work with a consultant, talk to people who already know the business, and work hard. Go with your gut. Take risks but first calculate your risks.”