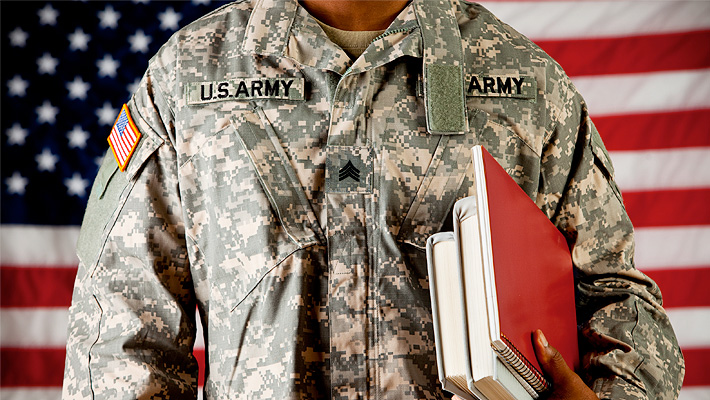 Military veteran Michael Scadden re-entered civilian life with goals of becoming a successful entrepreneur and a mix of confidence and caution. He had the discipline of a soldier, some experience as a government contractor and college work under his belt, as well as a background of marketable skills in risk analysis and security services.

Yet when his first entrepreneurial venture faltered, he knew something was missing from his toolkit. Scadden decided to expand his business acumen through an undergraduate certificate in international trade and investment at FIU College of Business. The program gave him his first taste of FIU’s business programs and inspired him to continue his education with a graduate business degree.

He enrolled in the Executive MBA, a program designed for entrepreneurs and emerging executives who want to focus on leadership skills and C-suite jobs. The university’s Veteran and Military Affairs office helped him secure tuition through the GI bill.

Today, he’s an evangelist for the value of post-service university education.

“Every single veteran needs to go back to school,” he told a group of students, veterans and others at an FIU MBA presentation on November 3, 2016 geared toward veterans. “It’s absolutely essential to making the transition from military to civilian life. It not only makes you more marketable, but it’s a great stepping stone to a successful transition to life outside the military.”

Driving a culture of ongoing success.

Angel Burgos, executive director for FIU’s MBA programs, explained how FIU strives to instill a culture of high-level success and entrepreneurship through its MBA programs—a culture that fits well with a military background.

“We are the school for dreamers and strivers, the place people come to be transformed into something great,” he told the group.

Scadden and three other panelists at the event talked about a university education’s ability to soften some of challenges of transitioning to the civilian world. They noted that service delivers an unparalleled set of skills, including leadership, discipline, teamwork and pressure under fire. Yet translating those skills into business success poses unique challenges for each veteran.

This was the case for Joseph Sinicrope, an officer with the United States Maine Corps for 22 years, serving throughout the world.

“In the military, you’re put in charge of alpha males and alpha females,” said Sinicrope, who also moderated the panel. “There is not a shred of self-doubt, and you become exceptionally comfortable navigating some of the most complex cultural environments throughout the world.” Ironically, he said, “I felt a sense of self-doubt for the first time about transitioning into the civilian workforce of my own country.”

Becoming part of the Executive MBA program changed that.

“You’re sitting next to self-made men and women who have been successful, and you start wondering – do I have the skills, leadership, character necessary to be in that group?” he said. “And quickly, you find that the skills you acquired in the military put you not only on par but in many instances ahead, particularly in leadership and management.”

Sinicrope found himself so comfortable in the academic environment that he joined the FIU staff. He is a research scientist and project manager at the FIU Applied Research Center, and is studying for his PhD in FIU’s Earth and Environment program.

Rene Jewett knew he wanted to be in the military from the time he was five, but also wanted a university education. After his service, he watched his daughter get an undergraduate degree at FIU through the GI Bill. Impressed with the university and the service it provided to veterans, he enrolled in the EMBA program.

For Jewett, who spent time as a government contractor between his service and grad school, the transition wasn’t always easy. “There’s a military culture, especially in the infantry and special ops, that gets perpetuated, and it’s very closed,” he said. “When I got back into an academic environment, I told myself I was going to embrace this, so I could be successful in business.”

He did, and eventually found that many aspects of the Executive MBA program duplicated the teamwork he built during his service.

“We’re staying together in small teams, working well for 22 months,” he said. “It’s almost like being in the military again, working together to accomplish tasks.”

Peter Bermudez, a police sergeant at the Miramar Police Department who served as a U.S. Army Major, also participated in the panel.