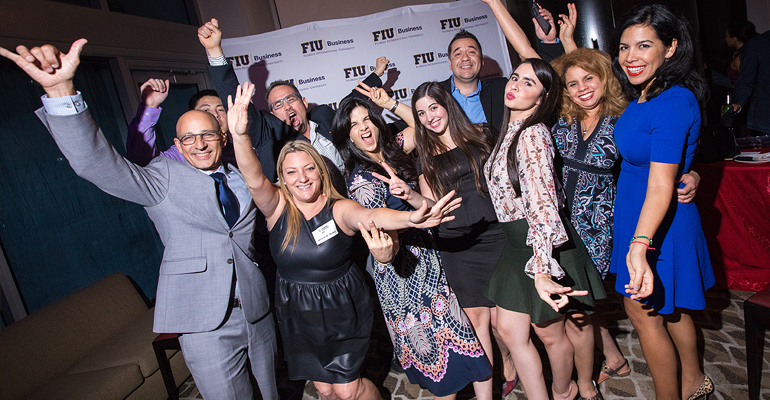 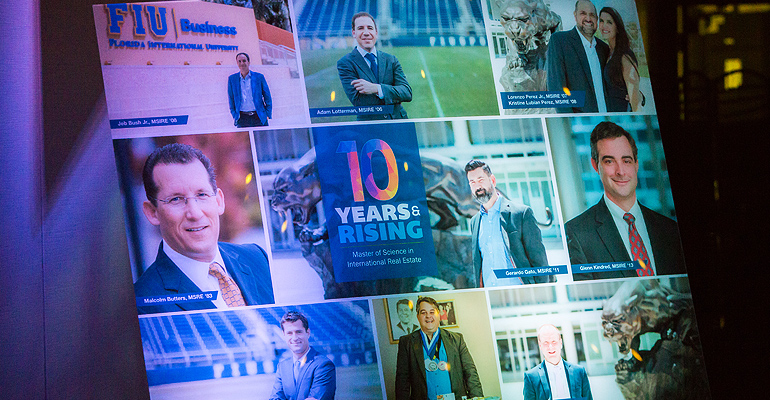 A decade ago, 15 students and three full-time professors came together as the first class of Florida International University’s Master’s in International Real Estate program in the College of Business. Now part of the Tibor and Sheila Hollo School of Real Estate, the program attracts students from across the world to its Downtown on Brickell location. This year, the program has 89 students and boasts 398 alumni.

What’s more, its faculty members are ranked first in the United States and second globally for real estate research by the Journal of Real Estate Literature.

To celebrate its success and showcase alumni achievements, the program hosted a Holiday Networking Social in early December that brought together professors, former and current students, and even Mr. and Mrs. Hollo themselves, whose gifts from the Tibor and Sheila Hollo Charitable Foundation have helped bring in new faculty, support students, and underwrite academic programming and research.

The event was held at the Epic Hotel in Downtown Miami, where, from the balcony, the city’s growth, which has paralleled that of the program, could not be missed.

“I am very proud of what has been achieved in such a short time,” said Mr. Hollo, who added that he and his wife focus their philanthropic activities on art, healthcare, and education. It was a natural fit for the storied developer and founder of Florida East Coast Realty, LLC (FECR) to underwrite education in real estate. He said that decisions by FIU and College of Business have proved impressive.

“One of the wisest things that Dr. Rosenberg did was open a downtown campus,” Mr. Hollo said, referring to FIU President Dr. Mark Rosenberg. “Brickell is full of young people,” he said, “anxious for higher education and career advancement, and the quality of the pedagogy makes the program stand out. The school has strong leadership, and it is very responsive.”

Added Mrs. Hollo, “We like the idea that it gave the opportunity to people who otherwise might not have had the chance to get an education.”

The efforts have paid off. “People know who we are,” said William G. Hardin, director of the Hollo School. He noted that the Master’s program geared up just when the housing market began to decline, which meant that those who applied in the first years were among those most committed to pursuing a real estate career. Since then, he said, the school has strengthened and broadened the curriculum, with a focus on corporate real estate, capital markets, global real estate, an online component, and initiatives connecting students in Guatemala and Germany.

Faculty set the pace for a high-quality program.

Also setting the program apart is the quality of faculty. “We have a foundation of intellectual capital,” Hardin said, noting that the program, with five full-time faculty members, leads both the state and country in academic real estate research. “To have that scale takes a commitment.” 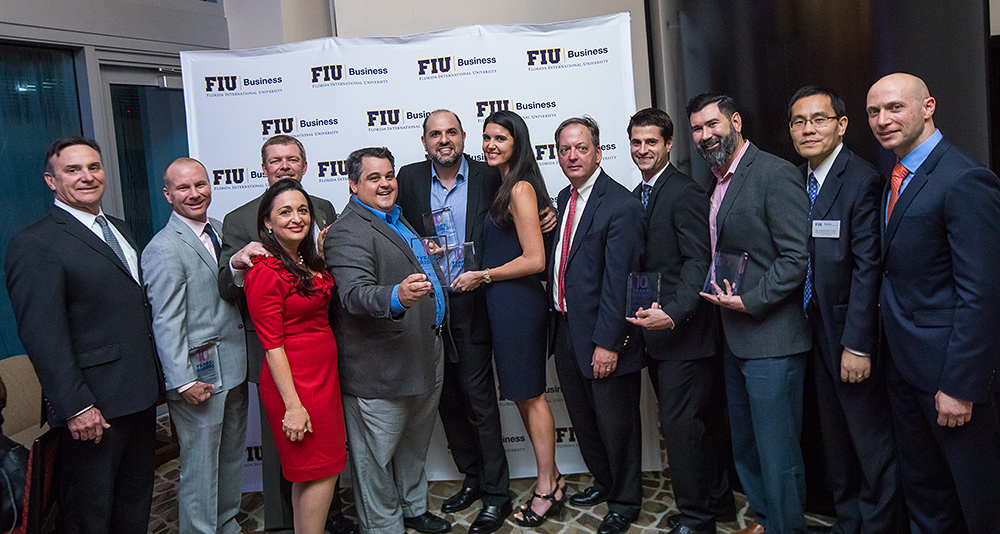 Illustrating how that commitment plays out in real life were 10 program alumni who were honored at the event for their professional achievements and work in the community:

The program, said McDowell, who is also a real estate advisory specialist for the Southeast Region at Wells Fargo Bank, was a way to stand out from others in his field. “There are a lot of people in real estate, but not a lot have advanced degrees,” he said, adding that a focus on the financial side of the sector was a big draw, but the best part of the program was networking with fellow students and professors, who took students beyond education with exposure to Miami’s real estate market.

Also attending the event was College of Business Acting Dean Jose M. Aldrich, who said that one need only glance at the skyline to understand why real estate is a pillar of the Miami business community. The MSIRE program’s success, he added, is a reflection of the quality of the faculty and is revealed in the achievements of its graduates.

“The alums are really the success of our program,” he said.