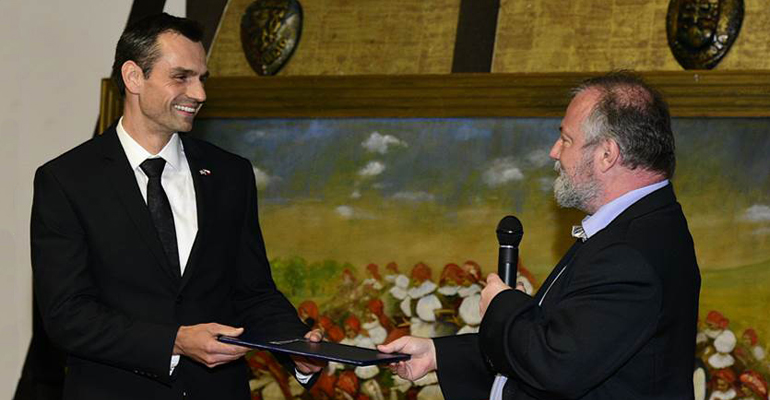 Florida International University students are used to having accomplished international professors in their classrooms. But in the case of Stanislav Jansta, clinical instructor in the College of Business’s School of Accounting, they have something more: an honorary consul.

Jansta’s position covers the southeast and southwest areas of the state. In this newly-opened office, Jansta becomes the 24th Honorary Consulate of the Czech Republic in the U.S.

“The main reason was to give back to people in business in the Czech Republic who need an introduction to the United States,” he said. The role is diplomatic as well, he said, and involves establishing cultural exchanges across business, the arts and sciences.

Jansta hopes to enrich the university by fostering academic and student connections. At the same time, Jansta serves as a resource, becoming the go-to guy for Czechs in South Florida who run into problems, such as lost passports. “It’s like an extended hand from the embassy,” he said.

Jansta’s new position also reflects well on the university, said Ruth Ann Mc Ewen, director of the School of Accounting and senior associate dean of the college. “Stan’s activities support the mission of the college and the university: to foster global relationships. We are honored to have him on faculty,” she said.

It took time, effort and networking to attract the notice of the Czech diplomatic corps. Jansta came to know Cecilia Rokusek, Slovakian Honorary Consul in Miami who gave him background about what the position entails.

With a foot in both worlds, Jansta is well-positioned to bridge the 5,000 miles between Miami and Prague. He grew up in the Czech Republic and emigrated to the States 13 years ago, earning an accounting degree at Walsh College in Troy, Mich. He then came to FIU for his Executive Master of Science in Taxation, graduating in 2008.

While working as an auditor for an international CPA firm in Miami, Jansta also recruited for the university and was soon tapped to teach accounting courses. Now married with a young daughter, Jansta is also managing director at Soleil Partners, an accounting, consulting and recruiting firm in Boca Raton.

Jansta’s new position could usher in unique partnerships at FIU. He is a member of the steering committee of the Vaclav Havel Program for Human Rights and Diplomacy at FIU, named for the former Czech president, writer, philosopher and prominent dissident. The organization, which is part of the Steven J. Green School of International and Public Affairs, is focused on the politics of human rights and the process of democratization.

South Floridians may not realize it, but there is a substantial number of Slovakians, Moravians and Bohemians living in the region. Many are members of the American Czech-Slovak Cultural Club in North Miami, founded in 1949, of which Jansta is a board member. It is where he first found friends and contacts from the old country, and he hopes to provide the same sense of home to today’s young immigrants and visitors.

Jansta also hopes to foster art exhibitions and exchanges between South Florida and the Czech Republic. “I’m a business person, and I run a thousand miles each day,” he said. “The art side slows you down to look, and enjoy. I love art exhibitions. It’s something we don’t spend enough time on.”