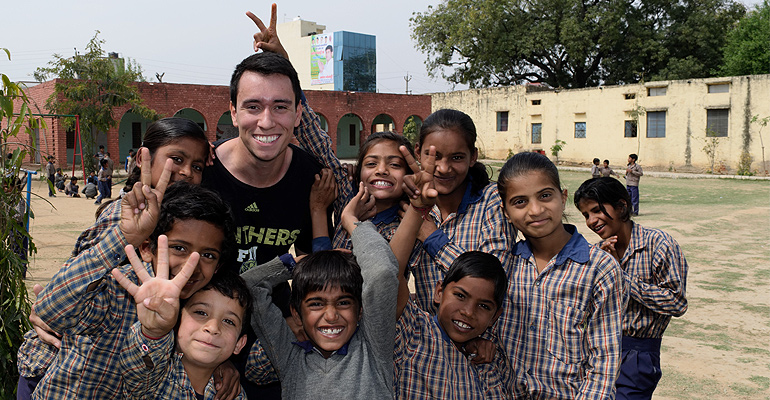 It all began with a pouf, a fabric-covered hassock created last year by a group of village women of Bandhwari, India, in collaboration with nine Florida International University College of Business students as part of their annual social entrepreneurship project. When the 2016 trip was over, the students, all members of the International Business Honors Society, vowed to return and help the women turn their crafts-making into a profitable business.

And return they did. In March, 10 society members, including some from last year, went back to Bandhwari. They now have new products, including a tote bag and carryall, and optimism that, with the women sewing in India and students setting up marketing and distribution in the United States, the enterprise will generate income for the village, to be used for better schooling, improved health care and higher living standards. 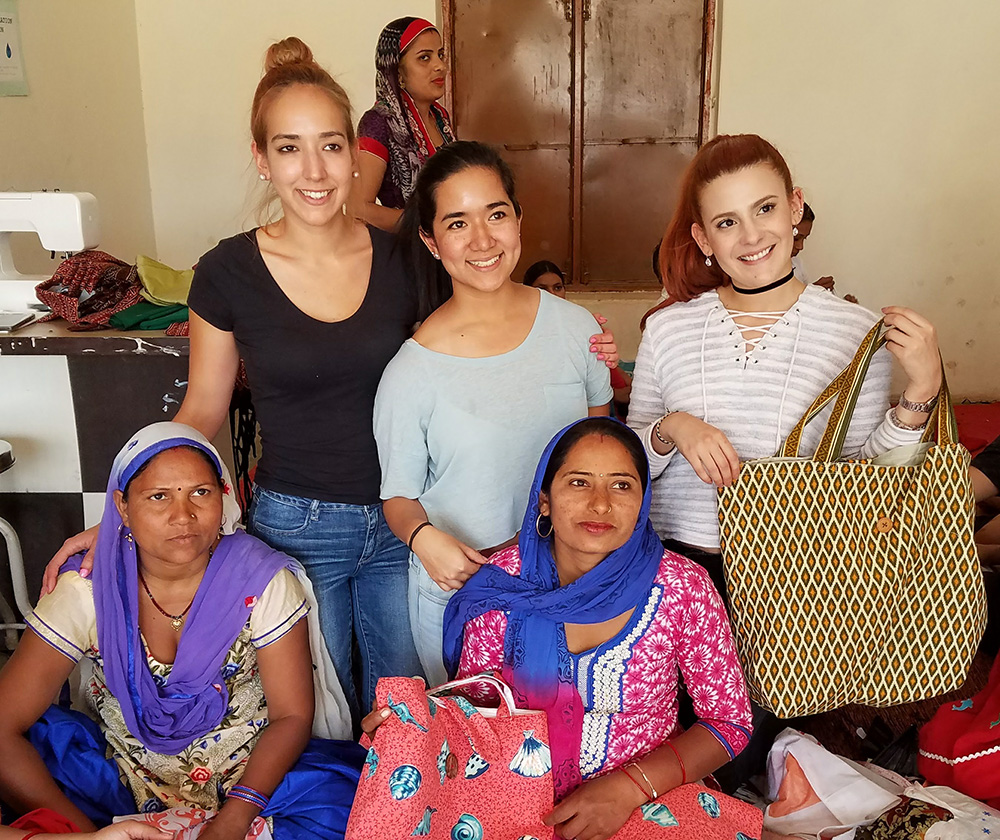 But products are only the starting point. The students learned firsthand about the challenges of launching an international export business, and how to work collaboratively with people from vastly different cultural and socioeconomic backgrounds.

“It was so much more than I expected,” said Andrea Alonso, a finance major, who went to Bandhwari for the first time this year. “The women were so welcoming. More than anything, they are open to learning. They really trust us.”

This year, in addition to selling bracelets made in Nicaragua to help support the trip, students raised more than $7,000 in corporate sponsorships to help fund it. For example, Alonso and team member Mateo Palacio co-managed the business sponsorship committee, which researched and reached out to more than 15 companies. 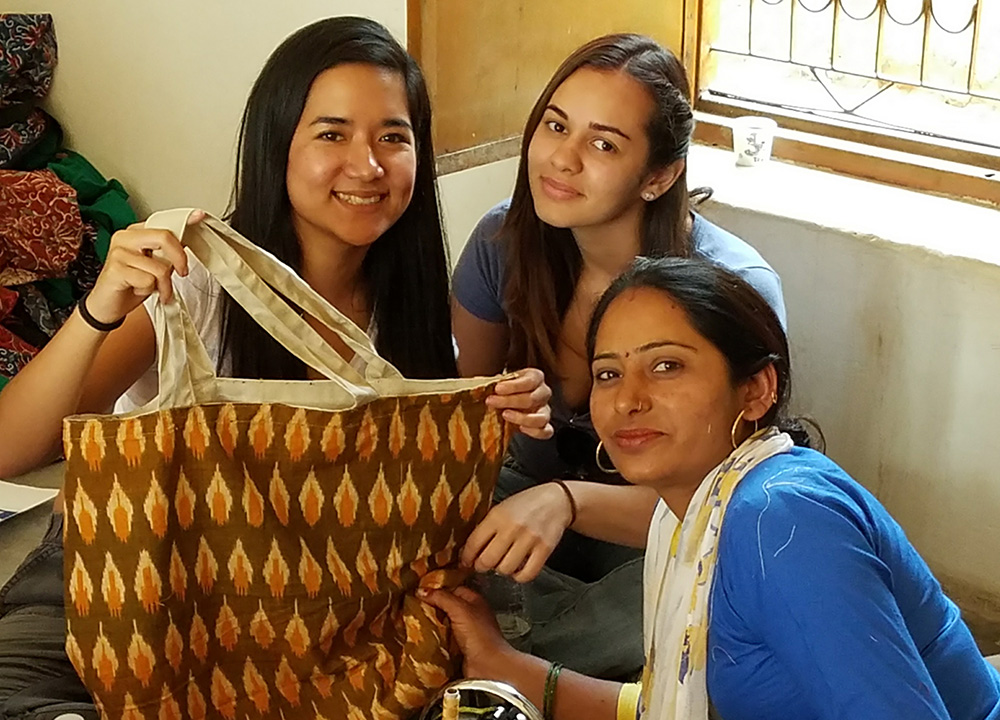 Donators included Walmart, and the College of Business itself. Alonso herself donated $1,000 she won in an essay contest sponsored by logistics firm WTDC, which asked society members to write about what it means to give back the community. This was the second year in a row that WTDC, owned and operated by the Gazitua family, provided financial backing for the trip.

Corporate event planning company, Forums Inc., where FIU student Camila Li is an intern, donated $5,000. “They believe in empowering women and trust our vision about what we are doing in India,” said Li, who went on both trips.

On the ground in Bandhwari.

Once back in the village, the FIU contingent found improved conditions, said David Wernick, senior lecturer in the COB’s Department of Management and International Business, who acts as faculty advisor for the trip. Wernick had the initial contact with the village in 2012 on a professional development trip.

“It was exciting to see how things have improved there,” he said. “A few years ago their primary school did not have desks or supplies for all the kids, and many showed up in the morning looking hungry and disheveled. Today they have fully equipped classrooms and the kids arrive, fed, dressed in uniforms, and eager to learn.”

Meanwhile, the dozen or so women working on the crafts project is double that of last year. The women were also able to hire a seamstress with an electric sewing machine to teach more advanced techniques. “Last year they did all of the sewing on an antique machine,” Wernick said. During their time in the village, the FIU students sourced sturdier fabrics, better zippers and fashionable buttons.

“We ultimately scored some tablecloth fabric which we used to craft some of the tote bags, which turned out gorgeous,” Wernick said. “We now have our local contacts scouring the markets for bolts of these sturdier fabrics, as we expect these bags to be the first to sell out.” 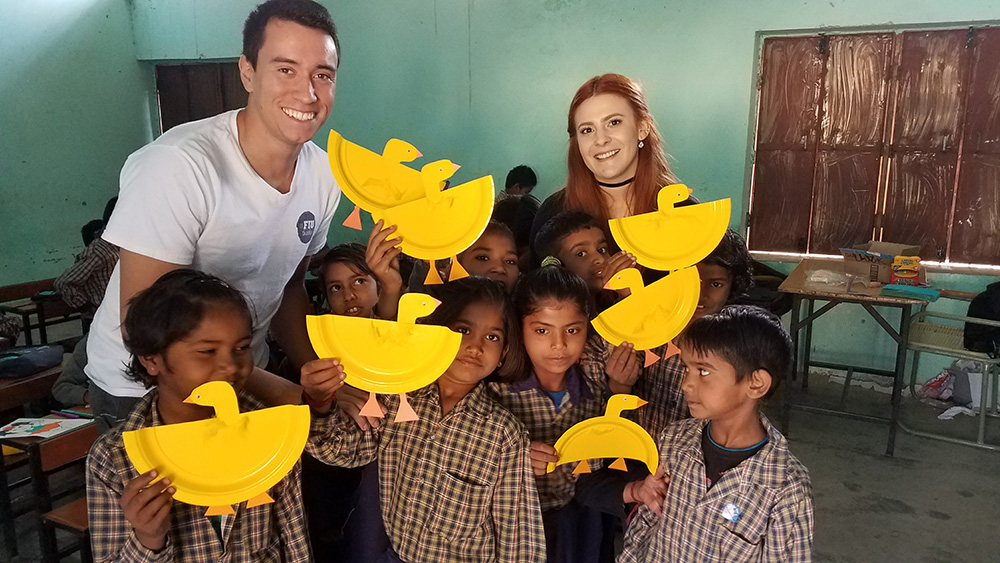 Li added that, with products in hand, she and her society colleagues are ready to do the U.S.-based marketing and sales work and start profits flowing back to India. “It will show these women that they are capable of working and getting rewarded for the effort they put in,” she said.

The impact of actually going to the village and working with the women surpassed expectations in every way, said Palacio. “The only barrier we had was the language barrier,” he said. “They developed the products super-quick.” His takeaway: don’t underestimate people.

Plans are already afoot to continue the connection next year.

“We are hoping this budding social enterprise takes off this year,” Wernick said. “Our mission quite simply is to change lives, one stitch at a time.”

This is the second of a two-part series on the IBHS India project. To read the first part, click here.