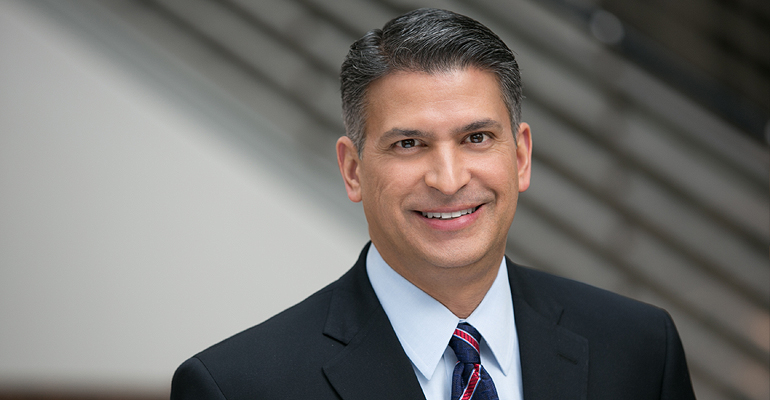 Two-time College of Business graduate Jose Tomas began his rise to human resource leadership working at Publix Super Markets in Miami. Over the next 20 years he held top-level positions in the healthcare, food service and transportation and logistics industries.

On July 1, 2017 Tomas became the senior vice president of global human resources at General Motors. He reports to GM’s CEO Mary Barra and serves on the automaker’s senior leadership team.

“I had read quite a bit about the transformation going on here [at GM], and I wanted to be part of it,” said Tomas (BBA ’92, MSHRM ‘03), who oversees human resources for all of GM. “It’s the biggest challenge I’ve had from a career standpoint.”

He describes GM and its employees as truly global.

“While walking down the halls you meet very diverse team members that have moved through multinational assignments,” said Tomas. “I’m part of a team that’s focused on competing globally.”

Tomas remembers the early days, when he began bagging groceries at Publix blocks away from his high school and later while at FIU. He stayed with Publix for 17 years, the first eight in operations followed by a run as manager and later in human resources.

When it came to selecting a college, Tomas said FIU was the right choice for him at both the undergraduate and graduate levels.

“FIU has many course options and it was a natural segue for someone like me who was working full time,” he added. “When I was in graduate school I was a human resource practitioner handling day-to-day work, and at FIU I recognized the value of research in the application of human resource management.”

After Publix, Tomas worked at Ryder System for five years. In 2004 he joined Burger King following its purchase by Diageo and remained as the company shifted between public and private ownership multiple times, most recently with 3G Capital. Concurrently, Tomas served as president of Burger King’s Latin American and Caribbean operations, leading 1,400 restaurants in 30 countries.

“I’ve been able to evolve over the course of my career and learned to be flexible based on the needs of the organization,” Tomas noted.

Throughout his career, Tomas has maintained close ties to FIU’s College of Business and was involved with the Chapman School’s Master of Science in Human Resource Management (MSHRM) Advisory Board for several years and later with the Healthcare MBA Advisory Board.

While at Burger King he established a management trainee program for undergraduate and graduate students, where they worked four months inside a restaurant and later at the corporate headquarters. Many were FIU students.

“The students at FIU are ambitious and want to succeed,” said Tomas. “As a business leader, you tend to seek out employees whose drive translates into high performance.”