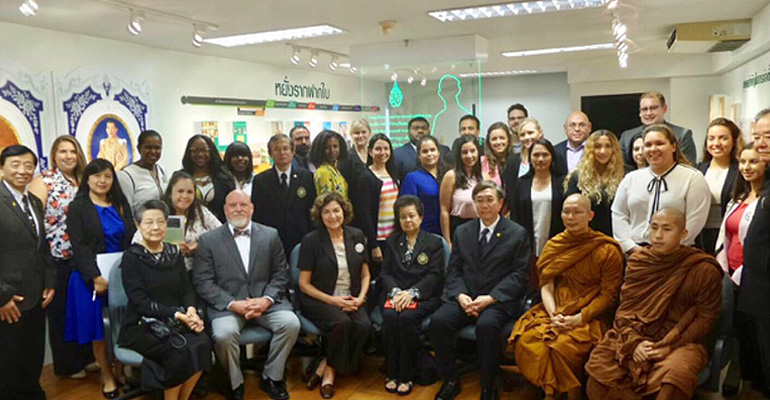 A Harvard-trained physician who is also a Buddist Monk. Practitioners of ancient medicine and manufacturers of modern medical devices.

These were just a few of the many individuals who helped provide a transformative experience for a group of 29 Florida International University College of Business students and alumni who journeyed to Southeast Asia with Miriam Weismann, Academic Director of the Healthcare MBA program.

“We met with Fortune 500 companies, we met with government organizations, we went to some of the most advanced hospitals, and the perspectives were very broad and thoughtful,” Weismann said.

The monk, Phramaha Dhirapanno, Bhikku, who addressed the group during a session sponsored by the Medical Association of Thailand, challenged his audience to think differently about the use of technology to prolong life, and consider death as a positive end when life’s quality is diminished.

It was the third such trip for Weismann. Previous trips took participants to China and the Middle East. The goal is to show students and alumni how other countries are dealing with the same challenges faced by the United States: expanding access, assuring quality care, and keeping costs down while using resources in the best way possible.

The countries they visited – Singapore, Thailand and Vietnam – had three unique healthcare models, albeit with similarities. “What we learned in Southeast Asia is what we learned in China: Even the most modern systems utilized traditional medicine,” said Weismann.

Still, each country takes its own approach. Singapore obliges workers to contribute to costs through a defined contribution system, Thailand is known as a medical tourist destination, and Vietnam, a communist country, still grapples with an infrastructure decimated during the Vietnam War and suffers from a doctor and nurse shortage.

In addition, every country has its own ideas about what constitutes universal healthcare, Weismann said.

In Vietnam, tours of tunnel networks used by the Vietcong, a war museum, and a late afternoon visit to Ho Chi Minh City and the Ben Thanh Market, brought to life histories few Americans really know, giving a deeper understanding of the country’s challenges.

A transformative experience for participants.

“What I walked away with after having more of a global view is that the answer to healthcare is not a one-size-fits-all approach,” said Nicole Dieudonne, a nursing director at Jackson Health System who expects to earn her Healthcare MBA in December. She was struck by how each country’s choices echo its culture. “In Singapore, for example the population is willing to go along with what whatever is dictated by the government as accepted practice such as “no smoking or you are fined $1,000.”

Dr. Ronald Ford, director of hospital medicine at Joe DiMaggio Children’s Hospital in Hollywood, said he gained a broader view of how healthcare is implemented. “Whether the health care system was great, or not so great, it was driven by some sort of policy,” he said. But that doesn’t seem so in the United States. “We just don’t have an encompassing policy to work from.” It was such a unique experience, he said, “to observe other cultures and focus on healthcare, coming from a country where we are still trying to figure out what we are going to do with it.”

Still, what stayed with him most was the Vietnam experience. “To go into the tunnels and see where a lot of carnage took place made me pause in a way I rarely do,” he said.

Both Ford and Dieudonne emphasized Weismann’s role. “She is awesome,” said Dieudonne, noting that the representatives they met clearly have a high opinion of Weismann and the university. “There is such a high respect for FIU, she was so well regarded everywhere we went.”

And, added Ford, “the number one thing I took away is a shout-out to Professor Weismann. “She did not miss one teachable moment.”