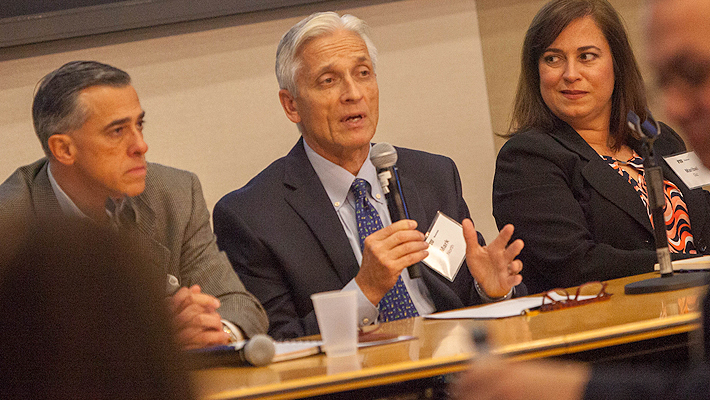 When leaders in international business education meet, the promise of progress is in the air. Ideas are exchanged, best practices are advanced, and students throughout the world stand to benefit.

FIU Business facilitated such a gathering of leaders and members of two prominent academic organizations: AACSB, the international accreditation agency for business schools, and CUIBE, the Consortium for Undergraduate International Business Education, which celebrated its 15th anniversary at its spring meeting, held at FIU. The outcome: a dynamic exchange of ideas on common goals, including the importance of immersive international business experience and lifelong business education.

They had the opportunity to tour the FIU Business facilities, including the Capital Markets Lab, Sales Program training rooms and SunTrust FIU Financial Literacy lab. They also took time to meet with students to explain how AACSB’s accreditation process works and to engage in a discussion about AACSB’s latest set of accreditation standards.

“The business school has to be actively engaged with the business community,” Robinson said. “There has to be an assurance of learning that’s based on what’s needed in real life.”

Robinson and Wiemer also explained the AACSB accreditation process, a detailed self-evaluation of a school’s academic practices that can take up to seven years. During the process, a school is assigned a mentor—a peer from an accredited school—who makes regular visits to evaluate the quality of educational programs and qualifications of the faculty in creating new knowledge. Later, a peer review team composed of deans from similar schools visit and verify that evaluation.

“It’s an ongoing process that measures students’ engagement with the community and with local businesses,” said FIU Business Dean Joanne Li, who has participated in the accreditation process several times.

Noting that AACSB has added emphasis on lifelong learning to the standards it promotes, Robinson said, “When you graduate, you’re not done. You’re never going to be done learning. You have to think about learning as something that you’re going to do for the rest of your life, continually adding to your skill set.”

When a student asked Robinson how one could determine the best AACSB-accredited school for them, he advised, “Work your network—get information and insights from your friends and colleagues.” He also directed students to Best Business Schools, an AACSB-affiliated website, for more information.

CUIBE: Celebrating fifteen years with cafecitos and a “Quinceañera.”

On Friday, they were joined on campus by members of CUIBE, the Consortium for Undergraduate International Business Education. In a celebration of CUIBE’s 15th or “Quinceañera” anniversary, discussions were fueled by Cuban cafecitos and Miami’s March sunshine.

“A cafecito signifies three important aspects of CUIBE.” he told the group of about 41 attending.

“First, it is indicative of family, which this organization has become to many.”

Noting that CUIBE had grown from the original 10 founding business schools to 43 members today, he added, “Second, the cafecito is small but potent, and that’s what CUIBE is. We’re not as small as we used to be–and we’re increasingly influential in the international business community.”

Playing off the stereotype of Latin American cultures taking a nap in the afternoon, Newburry added: “The jolt of energy from the afternoon cafecito signals that we’ve only just begun, and we still have much more to accomplish.”

In addition to its business meeting, held Saturday, CUIBE members spent Friday in a series of meetings on topics ranging from global education and lifelong learning to the value of an IB education from the executive suite, and what international skills will be most important in an increasingly technology-driven global landscape.

In addition to the presentation by Tom Robinson–the first time an AACSB president had spoken at CUIBE–presentations were made by multiple leaders in the education field including Tim Duvall, senior program officer for International and Foreign Language Education at the U.S. Department of Education, and Friedemann Schulze-Fielitz, Associate Director of EFMD Global Network Americas.

At a celebratory dinner on Friday evening, CUIBE honored Joyce Elam, who served as Executive Dean of FIU Business for 15 years. She was among the international business school leaders who supported the formation of CUIBE, of which FIU was one of the 10 founding members, and helped guide its early years.

In honoring Elam, Newburry recalled how she quickly saw FIU’s potential for leadership in international education, “and she said: ‘This is what we should focus on.’ “

Accepting the honor, Elam noted that “making the college a leader in international business was a very personal goal.” Recognizing the IB faculty and milestones they shared along the way, she said, ”I look back at those years with a lot of pride and a lot of joy.”

“The CUIBE conference at FIU was an excellent platform for learning and exchanging ideas about IB education,” said David Sprott, president of CUIBE. “The conference was world class and further cements FIU’s leadership in the field of IB.”