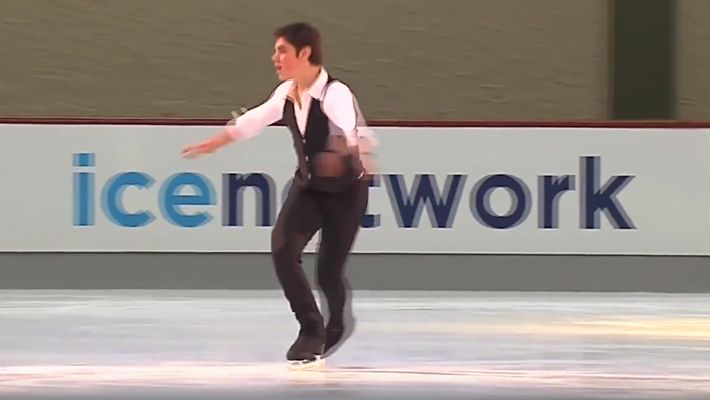 Many talented and enthusiastic students attend Florida International University’s College of Business. But few can look back and reminisce about life as a world-class figure skater – and have the YouTube videos to prove it.

That’s part of what sets Luiz Pereira apart. Skating under the name Luiz Manella, he represented his native Brazil in the Nebelhorn Trophy, and missed qualifying for the Olympics by a whisker. But when a series of injuries sidelined those ambitions, he brought the energy and discipline that propelled him to skating’s top ranks to his college career.

At FIU Business, Pereira served on the Dean’s Student Advisory Board and, until recently, worked as a fellow in the SunTrust FIU Financial Wellness Clinic. He also joined FIU’s chapters of ALPFA (Association of Latino Professionals in Finance and Accounting) and the Phoenician Investment Fund.

From training to test-taking.

When he started at FIU in 2013, while still training as a skater, “I was a good student, but I didn’t enjoy school,” he said. “I wanted to be a professional figure skater.”

He began preparing for that career at age 12, training in South Florida a few years after he and his family moved from Brazil to Miami to join his father, who had already moved at least a year prior. He first went to a rink to play hockey, but the prospect of working on jumps drew him in, and he landed his first triple axel and quad jumps at 17 and 18 (changed to 17-18).

The skating life was demanding. “I missed out on birthdays, I haven’t had a summer off since I was 12,” he said. He worked with top coaches, toured the world, and was on track for a spot for the 2014 Winter Olympics when an injury took him off the ice. He recovered, and four years later, he had been paired with a talented South Korea skater and was on the road to the 2018 winter Olympics when a detached ligament derailed his plans.

At that point, he moved his focus to school. It took him a while to find his academic feet. “I hopped around majors for a bit,” he said, noting he considered engineering and criminal justice before choosing finance.

“I wanted the opportunity to be constantly engaged, constantly changing, not working on the same thing all the time. The stock market provides that–it’s never static.”

FIU Business Assistant Professor Yeonju Jang helped him see how important advanced mathematics is in finance. He is working on a dual degree in applied math and finance and expects to graduate in 2019.

Meanwhile, Pereira, along with his best friend Nicolas Bautista, started a company called Algo-nomics, which automates research for retail stock traders. “We code the strategies, and users customize them,” explained Pereira.  “Retail traders don’t have the time to do research. We’ve written code that looks at patterns based on user input.” A mobile application sends a smart phone message when it’s time to buy, and the user can decide whether or not to make a trade. It’s expected to be launched within a year.

Pereira says the lessons he learned from skating have been invaluable in his life as a student and entrepreneur.

“Skating gave me discipline and maturity,” he said. “They are broad words, but it boils down to work ethic, discipline and passion. Are you willing to give up everything for what you are doing?” he said, noting that such habits aren’t easy to master–but doing so pays off.